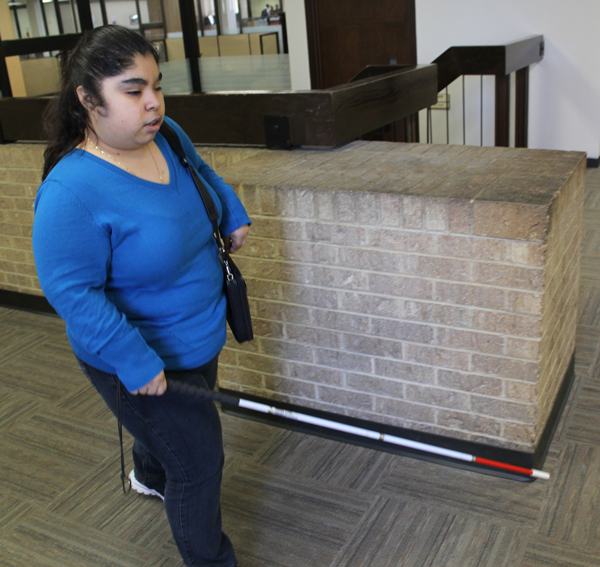 With a purse on her shoulder and a cane in her hand, Vanessa Ochoa walks to class. With great dexterity, she taps her surroundings, careful not to trip or walk into a student.

Ochoa, a radio, television and film major, has a visual impairment disability. She is one of about 400 students with disabilities that come to Eastfield every semester.

Her experience at Eastfield has not been very rewarding.

“It’s not bad,”Ochoa said. “It’s not as great as I wish it could be.”
Although she considers herself friendly and open, her days are lonely. Currently, the only conversations she holds with her classmates are about group projects. She doesn’t have many friends at Eastfield.

“I don’t really talk to students,”Ochoa said “Most people that I talk to [are] not friendly. Some people are not that great to be friends with.”

Ochoa’s experience demonstrates how there is still a stigma following people with disabilities.

Although Ochoa said she faces the same difficulties as any other student in an educational setting, she is thinking of changing her major to counseling services because she believes that she won’t get many opportunities in the communications field.

Ochoa said that one of the greatest challenges at school is using Pearson digital products. She uses the TRiO tutoring service for math, the subject she has the most trouble with. If she could change anything about Eastfield College, it would be that math teachers were not required to use MyMathLab.

Even Blackboard, Eastfield’s online learning platform, presents a challenge to Ochoa. However, she said that the technology was not the problem, but that her professors don’t take the time to explain where to find her assignments.

“Why can’t they say ‘Click on Blackboard, then group project, then the chapter of the class.’They won’t tell you exactly where to find it, in case you don’t know it.“ Ochoa said. “If you need some additional notes, they won’t give it to you. I can get into my [online] class, my course, but then there’s way too many links.”

She receives help from the Disabilities Service Office on campus, a federal-mandated agency present in every college or university in the country. Ochoa said that sometimes she feels like the people who are helping her treat her as an inferior.

“Some people are rude,”she said. “If they [were] a little nicer in their tone of voice … we would appreciate that.”

In 2010, the office assisted 16 students with blindness and visual impairments, which posed a new challenge.

The office provides services to students suffering from physical and learning disabilities such as blindness, deafness and dyslexia, among others.

“Our goal is to make an even playing field,”director Bobbi White said. “What we do is figure out what’s the disability, how does that impact [students] in an educational setting and how can we alleviate that.”

There are no specific ways to treat a student’s disability. Based on their major, their interests and their classes, their experience with the service may vary.

“All services are individualized,”White said. “[Students’] services will be different each semester, depending on [their] classes.”

Robin Robinson, a substance abuse counseling major in her fourth semester, had a stroke three years ago and has since been diagnosed with cerebellar ataxia, which affects balance and coordination.

Activities such as cooking, showering and using stairs present a challenge to Robinson. She said she likes the college and the work of the disabilities office, which helps her receive extra time for testing and recordings of lectures.

“We never know how many students are going to come,”she said. “We never know who’s coming to register for the next semester or what services they might need.”

A large number of deaf students is enrolled at Eastfield.

The disabilities office employs two full-time and up to 20 part-time American sign language interpreters. Every student who requests it can count on an interpreter for their classes.

Contrary to popular belief, interpreters are assigned to classes, not students.

Kathy Bayne, a full-time interpreter who has worked at Eastfield for 14 years, said that the greatest challenge facing deaf students is the discrepancies between American Sign Language and the written word.

“American Sign Language is not English on the hands,” Bayne said.

Eastfield alumna Nikki Tamez works as an interpreter in the disabilities offices.

“Educational settings are probably the most important place to receive equal access to effective communication because without the proper language skill and knowledge base, many life opportunities become inaccessible,” Tamez said in an email interview.

White hopes that the students who go through her office feel like they receive the help they need.

“Eastfield is an inclusive environment and we want to be welcoming to all students,”White said.