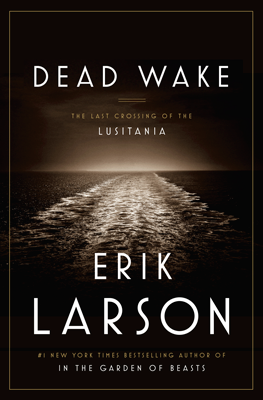 “Dead Wake,” written by non-fiction narrative author Erik Larson, is a climatic delineation of the events that happened leading up to, during and after the Lusitania’s fate.

Larson was born in Brooklyn, New York, in 1954 but grew up primarily in Freeport in Long Island, New York, a suburb of the city. He graduated from the University of Pennsylvania in 1976 with a degree in Russian History then progressed to receiving a graduate degree in journalism from Columbia in 1978.

Larson has taught non-fiction writing seminars at the University of Oregon and San Francisco State University. He has contributed to The Wall Street Journal, Atlantic Monthly, Time, The New Yorker and Harper’s.

“Dead Wake” is not Larson’s first book. He has written six other non-fiction narratives. Many of his previous works as well as “Dead Wake” involve retelling of historical events forgotten by modern civilization.

“It is not necessarily my goal to inform. It is my goal to create a historical experience with my books,” Larson says in “Dead Wake.” “My dream, my ideal, is that someone picks up a book of mine, starts reading it, and just lets themselves sink into the past and then read the thing straight through and emerge at the end feeling as though they’ve lived in another world entirely.”

World War I began in July 1914 centered in the Balkans, eventually involving nearly all of Europe. President Woodrow Wilson was hesitant to assist the warring continent, keeping America neutral.

In May 1915 a 787-foot British superliner, the RMS Lusitania, set sail on its maiden voyage from New York to Liverpool, England. In an act of unrestricted warfare, a German U-20 submarine fired a torpedo into the cruise liner nearly 11 miles off the coast of Ireland.

The sinking of the Lusitania marked Wilson’s choice with the support of the American people to enter the Great War in 1917.

“Dead Wake” tracks the voyage of the Lusitania while delving into the high profile American passengers and conspiracy theories surrounding the fate of the cruise liner. The novel features Wilson and Winston Churchill as characters and creates an unparalleled perspective of the Germans aboard the

“Dead Wake” briefly explores the long-standing curiosity surrounding the second explosion that delivered the fatal blow to the ship. The Germans argued that the British had been utilizing passenger liners akin to the Lusitania to quarter weapons and soldiers from the self-proclaimed neutral America to Britain.

U-boat Capt. Walther Schwieger was stunned when he saw a second explosion from the cruise liner, not believing that a single torpedo could sink the great ship. It was known that the liner was harboring 4 million rounds of ammunition in addition to tons of other war-related material, potentially guncotton.

If Larson’s desire is to create that otherworldly element, he has succeeded with “Dead Wake.” The portrayals of Churchill and Wilson create an environment for the reader. You are truly able to envision the panicked and mysterious telegrams sent back and forth between the leaders and among Berlin, London and America.

Larson’s true success of mastering the macabre and weird truths of history is evident in “Dead Wake.” Previous works such as “The Devil in the White City,” a non-fiction piece about the serial killer H.H. Holmes and the Chicago World Fair, illuminate Larson’s effervescent attraction to the haunted and sociopathic. We see the return of this partnership brilliantly in “Dead Wake.”

For nearly 100 years the Germans have been painted as cruel devils in the Lusitania’s demise. Naturally, this triggers Larson’s interest. He explores the conditions that U-20 captain, Schwieger, and his men lived in.

“The toilet from time to time imparted to the boat the scent of a cholera hospital and could be flushed only when the U-boat was on the surface or at shallow depths, lest the undersea pressure blow material back into the vessel,” Larson writes.

Larson humanizes the German submariners, creating an empathetic relationship between the reader and the enemy. “Dead Wake” spends quite a bit of space contrasting the invasively tiny quarters of the U-boat and the sea they were submerged in, explaining the loneliness the German submariners experienced atop the filthy conditions.

By the end of “Dead Wake” the reader begins to shift their opinions of the Germans, specifically Schwieger. The German captain was a leader who pursued his job relentlessly in an almost impossible environment.

“Dead Wake” marries history and narrative so eloquently that the reader completely disregards the obvious research measures taken by Larson to weave this tale of maritime tragedy.