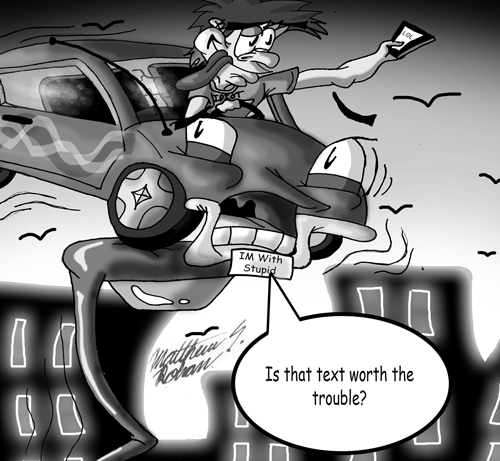 It’s been almost four years since former Gov. Rick Perry vetoed a bill that would have outlawed texting while driving in Texas, and now that the House has passed a similar bill 102-40, we are hoping history won’t repeat itself with Gov. Greg Abbott.

House Bill 63 would make texting behind the wheel a misdemeanor. First-time offenders would be fined $100 while repeat offenses would cost $200. Texas is one of only six states that do not have any laws banning the practice.

The statistics say enough: Texting while driving is dangerous. According to the Department of Transportation, cell phone use contributes to 1.6 million car accidents, which claim an average of 6,000 lives every year. That’s nearly a quarter of all accidents in the country. Texting is also more distracting than simply talking on your phone. While talking or listening to a device makes you 1.3 times more likely to crash, texting while driving multiplies the risk by 23, according to the National Highway Transportation Safety Administration.

We support criminalizing texting while driving and think such a law is long overdue. Too many lives have been lost to asinine messages that could have easily gone another few minutes without being sent. Distracted drivers are not only a danger to themselves but to their passengers and fellow drivers.

That said, we also think the bill is in need of some revision.

A major problem with House Bill 63 is that it would be difficult to enforce. It can’t be easy for police to differentiate between unlawful texting and a perfectly legal phone conversation from within a moving vehicle. And it would be even harder for a law-abiding driver to prove they were not typing on their phones when they are inevitably pulled over. We need to set stricter guidelines for the benefit of police and drivers alike.

One way to prevent ambiguity would be widespread use of hands-free devices, such as Bluetooth headsets. Taking a moment to put our cell phones on speaker would also reduce confusion. For example, California is one of many states that bans handheld cellphone use and texting but permits headsets, car kits and wireless devices.

Additionally, the bill does not currently outlaw Internet or social media usage while driving. It doesn’t make sense to allow one distraction while banning another.

Some have criticized House Bill 63 as a violation of American citizens’ freedom. When Texas first required drivers and passengers to wear seatbelts, legislators heard similar backlash. Yet seatbelt use is fairly commonplace now.
Outlawing texting would not only make it safer for drivers, but for everyone else on the road, so why do we continue to let this practice go unpunished?