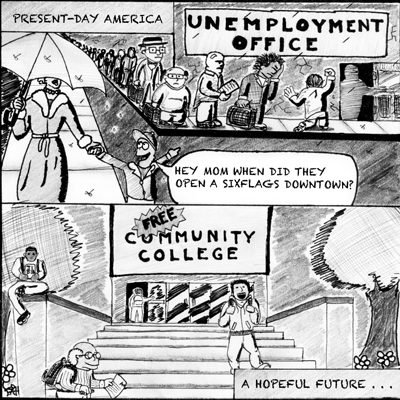 While the announcement has been met with equal parts optimism and skepticism, we applaud the president’s initiative.

Higher education isn’t cheap. More than 40 million students are struggling with a collective $1.2 trillion in tuition and student loan debt, and that number is rapidly increasing as more and more high school graduates are pressured into attending expensive universities to earn degrees for jobs that didn’t require such levels of education 20 years ago.

An estimated 35 percent of jobs will require a bachelor’s degree or higher by 2020, according to the White House. Community colleges offer a much cheaper alternative for recent high school graduates planning to transfer to larger universities and returning students working toward associate’s degrees or certificates. But even these institutions are not realistically affordable for everyone.

The national average for tuition and fees at public two-year colleges was $3,347 last year, according to a study by the College Board. Texas fared better than most states with an average cost of $2,286, but some states — such as Vermont at $7,320 — were more than twice as expensive.

In addition, astronomical college costs have an adverse effect on the U.S. economy. People who are hundreds of thousands of dollars in debt aren’t going to be spending money on other things, and overwhelming debt is still a chronic problem even without student loan costs.

Americans have never liked paying taxes. You could say it was one of the central reasons our country was established. But a slight increase in taxes is nothing compared to an economy dangerously overburdened by several lifetimes of debt from students desperately seeking to get a foot in the door of the rapidly changing job market.

Decades ago, Americans reacted with uncertainty toward the concept of free public high school. In a country where associate’s degrees are in increasingly high demand, why should it be any different for community college students who are willing to put in the work?

President Obama’s plan has merit, and if we hope to put a dent in the hyper-inflated costs of higher education, we can’t afford to pass it up.