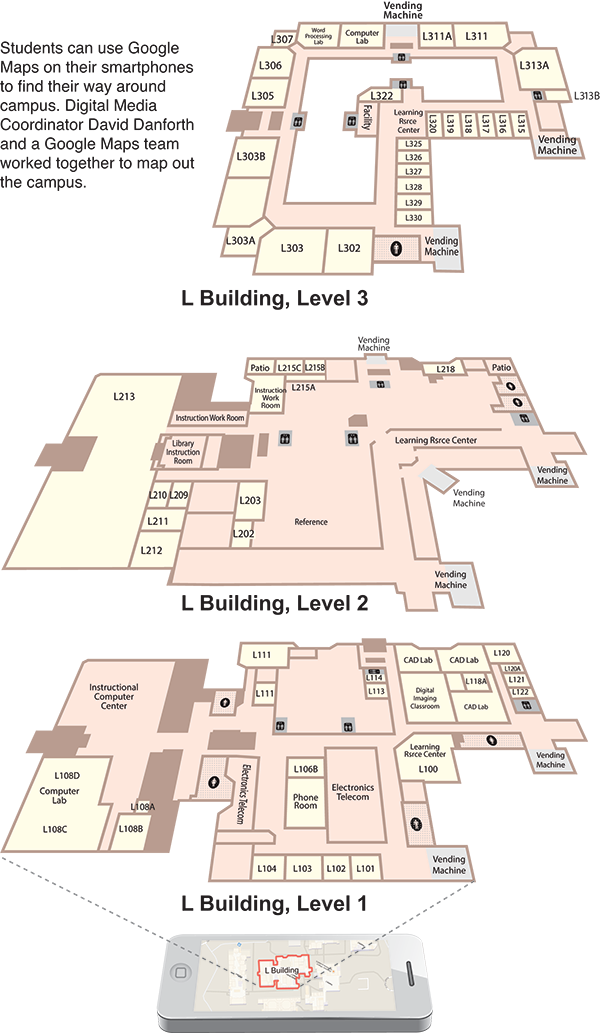 On the first day of class, many students are scrambling around, trying to find their classes, asking for directions and then arriving late to class.

But students will no longer have to worry about getting lost on campus.

Now their smartphones can lead the way, thanks to Google Maps.

He said almost all of the buildings are done. The only glitch is that the admissions area on the first level of the C building is missing.

For security reasons, the K building with the child-care center was not mapped.

A Google representative contacted the Dallas County Community College District office in 2012 about mapping all of the schools and requested blueprints.

“The Google team had to go to every classroom and every corner to graph the entire campus,” Danforth said.

It took a week for the team to walk every inch of the campus with their smartphones to ensure accuracy. The indoor map allows users to zoom in and out, giving them a view of the layout.

There is also a street view showing the outside of the buildings.

Students have already started using their phones to guide them around.

The college bookstore can be tracked via GPS, along with the entrances, classrooms, public spaces, stairwells, elevators and auxiliary services, such as food services, ATMs, vending machines, restrooms and telephones.

Students can view all three floors by right-clicking the icon at the bottom-right corner of the screen.

Thanks to Google Maps, making it to class on time has not been a problem for some students.

“When I used the GPS on my iPhone to get to class, it gave me shortcuts,” Jones said.

District Director of Internet Publishing, Georgeann Moss said she was contacted by Google in 2012 to see if the DCCCD was interested in working together on this free project. She served as the colleges’ initial liaison with Google. Each college appointed a Google Maps coordinator to work directly with Google to supply the needed information.

“If you Google Eastfield College, the location map will appear on the right-hand column,” Moss said. “You can continue to zoom in on the location map until you see the individual buildings on the college campuses.”

The project began in late 2012. It took six months to build the Google map of Eastfield.

Danforth said he has always been a fan of Google because of its search engine and productivity tools. It offers many free applications that students can use every day in the classroom.

“Honestly, I just thought it would be a cool way for students to navigate the campus,” Danforth said. “By the fall semester, we’re hoping to have the college completely mapped.”

Danforth said plans are under way to create color-coded signs — similar to street signs — that will help everybody, mainly first-time students learn the layout of the campus.