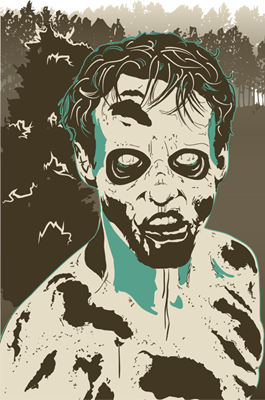 One minute, you’re studying in the library for the inevitable pop quiz in chemistry. Then, all of a sudden, a blood-curling scream rings out.

Panicked students and faculty members begin running down the halls of the second floor of the L building. You creep forward to investigate and see the bloody, decomposing meatbags known as zombies salivating after the taste of living flesh.

As the shuffling dead break through the library’s glass windows, you have two choices: Escape the library and fight your way out, or run to the private study areas in the back and barricade the pathway behind you.

Which choice would you make?

This is one of many dilemmas that come up in meetings of the Zombie Club, a weekly forum for all things living dead and post-apocalyptic.

“Zombies, when you see them in the movies, they’re always set in places that you normally would see, like houses, malls, toy stores,” said club member and business administration major Arlene Nelson. “I’ll go to the store and I’m thinking, ‘I wouldn’t mind if something crazy happened here,’ but the zombie apocalypse does that for you.”

The Zombie Club began last spring with the purpose of discussing the zombie phenomenon as it relates to video games, movies, literature, television and even what would happen if an imagined apocalypse were to occur on campus.

The zombie obsession can be traced back to director George A. Romero’s 1968 cult classic “Night of the Living Dead,” which introduced the familiar zombie formula of a cast of survivors trapped in a house trying to survive. Help never comes.

Zombie Club President Terrance Starling considers the film one of the top five zombie movies of all time, but he believes the zombie genre is flexible enough to adapt and evolve beyond Romero’s initial success.

“George Romero has a hundred different movies out — not literally, but he has a lot — and in each movie, his zombies are actually a little different than they were in the previous movie,” Starling said. “So everybody has their different zombies. In my opinion, ‘The Walking Dead’ zombies are as close as you can get to what I consider a real zombie.”

Starling found that “The Walking Dead” brand of zombies present a relentlessness that makes the main characters have to resort to desperate means to survive.    Some jump out of windows. Others saw off body parts to prevent infection from a bite.

“The Walking Dead” is a best-selling comic book series that began in 2003. It has spawned a television adaptation of the same name that has grown into one of the most watched cable series in history.

In the show, a group of survivors try to build a community while fending off a world overrun by hungry zombies and opportunistic bandits.

The club discusses the realistic setting of the show, which in its fourth season, introduced a new enemy in addition to the flesheaters.

A virus with flu-like symptoms has begun to infect and kill survivors on the show, and they have to figure out how to contain the infection before it spreads to the next person.

But the zombie genre didn’t always inject survivors into a post-apocalyptic setting.

Zombies used to be nothing more than voodoo-controlled B-movie projects that surfaced every so often, starting with 1932’s “White Zombie.”
The film was considered a critical failure despite the presence of “Dracula” star Bela Lugosi, who played a sugar mill owner who uses voodoo to control his army of workers.

Romero’s films steered the zombie conversation into one about resurrected flesheaters. Then, in the late 1980s, the genre began flooding video stores with such stomach-turning classics as “Zombi,” “Dead Alive,” “Cemetery Man” and “Return of the Living Dead,” which gave pop culture the single most famous phrase in zombie history: “BRAINS!”

Zombie Club Vice President Daniel Beckett said he believes talking about hypothetical zombie situations opens the door to other sub-interests.
For instance, Nelson’s interest in zombies led him to make crossbows in his spare time and even examine blueprints of Walmart Supercenters to strategize how he would maneuver past a herd of zombies to reach the pharmacy for medicine. Or aisle five for canned beans and corn. Or even hardware for—well, you know—brain-bashing material.

Beckett doesn’t see himself being a zombie-fighting badass like Nelson or Starling, who half-joking declared at a recent meeting that he could kill a couple of zombies with the stapler on the computer desk beside him.

“Weight vs. speed,” he said. “The heavier your backpack is, the more stuff you can carry in it, but the slower you’re going to move. You have the fight-or-flight complex. [Zombie scenarios] challenge your mind in a lot of different ways.”

Starling believes the zombie apocalypse activates the imagination of its audience, but in an entirely different way: bloodlust.

Starling said people love zombies for the same reason they loved “Star Wars” and “Star Trek,” as well as any other blockbuster franchise or trend.

“They love that uncertainty,” Starling said. “Fictional destruction is almost a turn-on. To some extent, we are animals. That’s just a fact. We are vicious creatures whether we know it or not. Every time we take a step, something’s being destroyed. Something’s being put off in the form of kinetic energy. Zombies, right now, is just that craze.”

So the debate continues.

Will you hide out in Subway, munching on sandwiches and drinking Dr Pepper until a rescue team saves you?

Maybe you’ll fight your way into the automotive department to gear up with wrenches and tire irons to use as effective zombie-killing tools.

That’s the fun of the zombie apocalypse. When the dead are dug up in conversation, one never knows where the brain will go.