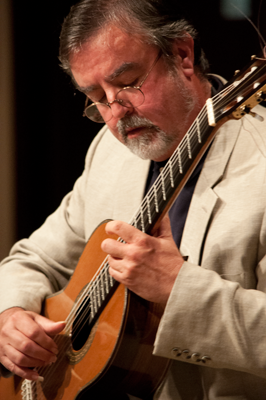 Enric Madriguera plays the strings of his guitar during a performance on Oct. 16.

The player?  Former Eastfield instructor Enric Madriguera, who is now a professor of aesthetic studies at the University of North Texas.

Madriguera selected arrangements related to classical guitar virtuoso Andres Segovia.  Each piece was written by someone who admired Segovia.

One of Madriguera’s choices was “Tonadilla on The Name of Andres Segovia,” which was written by Mario Castelnuovo Tedesco, a good friend of Segovia’s.

Another piece, “Humorada,” was composed by Madriguera’s aunt, Paquita Madriguera, who was Segovia’s second wife. Madriguera said he never knew Paquita, but she was a noted pianist.

The highlight of the program, though, was a duet written by Segovia himself entitled “Orraccion Estudios Diarios,” which was performed by Madriguera and Eddie Healey, a current guitar instructor at Eastfield.

The concert was a homecoming of sorts for Madriguera.

Eastfield is in good company. Madriguera has played in festivals throughout the world, in places such as Valencia, Spain; Sao Paulo, Brazil; and Cuenca, Ecuador. He will embark on another tour of South America, Mexico and Spain in November.

It was only the second time Madriguera had performed the selected program. The first was in Seattle a week earlier.

“A program like this is hard work,” he said. “Some of the pieces are quite challenging. Bach is difficult, but so was the last piece [‘Tonadilla sobre el nombre de Andres Segovia’].”

Although Madriguera makes it looks effortless, hours of work go into a program like this.

“I can’t count,” he said. “I’m on sabbatical and part of that is learning two new programs — this one, then one in the spring.”

Despite the difficulty of the program, Healey and Madriguera didn’t practice together much for their duet.

“I really had it learned before we met,” Healey said. “I think we met about three times.”

Madriguera has a couple of favorites in the program.

“[I like] the one Aunt wrote [‘Humorada’] because of the special connection with my aunt, and the last one because of the ingenuity of how it was put together based on the name [‘Tonadilla sobre el nombre de Andres Segovia’],” he said. “But I liked it all.”

“I loved it,” said Rachel Loss-Cutler-Hull, who teaches guitar at Eastfield. “Segovia is such an inspiration to classical guitarists, and to hear someone present a concert with that in mind is really fantastic.”

“I thought it was excellent,” he said. “The way he phrases the music is definitely something to take away.”

“Actually, I could hear some discrepancies from the guitar playing, but other than it was pretty good,” he said.

“What I think is so great about Dr. Madriguera’s performance was the fact that he spent so much time playing and talking about the music he played,” Healey said. “I think that can generate more interest in it. It is like going to an art gallery and seeing a piece of art that does not readily speak to the observer, but that you can learn something about the context that produced that art. Music works the same way.”

The next concert on Oct. 30, will feature Eastfield vocal instructor Melinda Imthurn.


Enric Madriguera was more than a classical guitar player to me when I entered Eastfield. I wsa 18 and totally lost. He taught me so much it’s hard to put into words, but I am so happy to see the success he has garnered and wish him many more years of success and every student is lucky to be taught by him so soak it up and practice.

He even used to let me use his guitar when the ensemble preformed. He taught me all about classical music and introduced me to Django and Paganini.

In fact in my Industry one of Paganini’s descendants (Pier Luigi Paganini) is HUGE in Information Security as an Instructor and Journalist. It is a way for us to relate to something other than IT or Information Security. It still surprises me how many InfoSec Pros play guitar, so I am so luck the patience and understanding that Enric showed to me.

Thank you so much!