Hampton remembered for hospitality, charitableness, Eastfield holding celebration of life in her honor 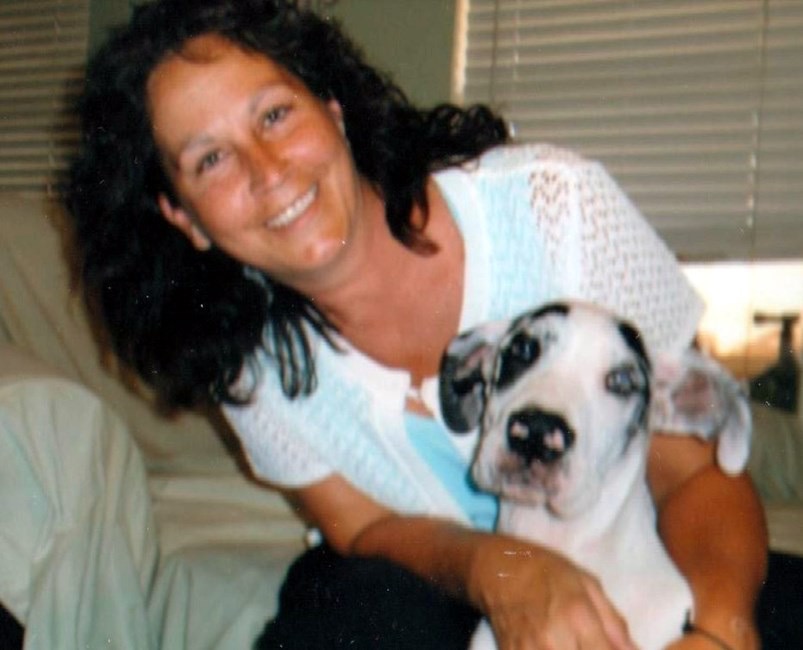 Sandy Hampton with her former Great Dane, Radar. She had three Great Danes at one point, and called them her “big-headed babies.” Courtesy of Hampton family.

Patience, generosity and a love of Great Danes and Scooby Doo are some of the many qualities Sandy Hampton, administrative assistant and “mother figure” for the Upward Bound program, will be remembered for.

Hampton died on Thursday, June 27, from complications with rheumatoid arthritis. She was 56.

Hampton worked with the Upward Bound program from 2000 until last fall, when her health problems became more serious. During her 18-year tenure with the school, Miss Sandy, as many knew her, started the Angel Tree project, organized a care package program for military service members and was a College Emergency Response Team member.

Amanda Frizzell, program coordinator for early college programs, said Hampton was a best friend and mother figure to her, and that no matter what Frizzell needed, Hampton would find a way to help her.

“She was just so caring,” Frizzell said. “She was almost saint-like. She cared for and loved everybody, even if she didn’t like you.”

From giving Frizzell money so she could spend the weekend with her husband in Oklahoma to ordering her food when Frizzell was stuck in the house for two weeks after a dog attack, Hampton would help in any way she could.

She said Hampton was like that for everyone, though. Whether it was students, faculty, staff or anyone outside of the school, Frizzell said she was always there to listen or lend a helping hand.

Hampton’s office was full of students who would come by to chat and get advice from her. On top of that, she kept Scooby Doo memorabilia, photos of former students with professional careers, toiletries, candy and an array of hot sauces for her students.

“The small things that she remembered and was willing to offer could make the world of a difference for these kids,” Jonathan Estrada, a coordinator with Upward Bound said. “Some kids could come to school and they don’t have money for deodorant, but Miss Sandy had it there.”

She kept more in her office than condiments and toiletries. Hampton would also keep food for kids who didn’t like the lunch options or for those who hadn’t been able to eat that day.

Because of Hampton, Kristina Every, director of Upward Bound, realized that food might be scarce for some of the students and now keeps some in her office.

“The kids loved her because she was like a grandma,” Every said. “She would get on to them when they weren’t doing what they were supposed to be doing. If they needed something to eat, she would always have food and candy.”

Miriam Moncivais, a former student and recent graduate of the University of North Texas in Dallas, said Hampton was there for her through some of the toughest times in her life.

Had it not been for Hampton, she said, she probably would have dropped out of high school.

“A lot of us saw her as the mother figure we lacked,” Moncivais said. “We didn’t have that affection from our parents because we were coming from homes that were kind of broken. She was always there to get us back together.”

After Moncivais finished the program she would visit Hampton on her birthday, bringing flowers and cake. She said Hampton was always checking on her former students to make sure they were doing OK and to see if they needed anything.

Multiple sources have also confirmed that Hampton even let students who had graduated stay with her after they were kicked out of their homes.

For years, Hampton would host a Thanksgiving meal at her home with former and present Upward Bound students on the Friday following the holiday. Estrada said she would cook two turkeys and a ham for the family meal.

He said one holiday season she won a $5,000 shopping spree at J.C. Penney by writing an essay about how she would spend the money. She said she would buy sweaters and other clothing items for the troops.

She won the award and did exactly what she said, plus more. After purchasing the clothes, Hampton bought toys for kids in need, but due to the expensive price of toys at J.C. Penney, she returned them and got her money back. Hampton then went to Walmart to get more toys for her money.

“I was like ‘Well that sounds like Miss Sandy right there,’” Estrada said. “Trying to optimize the most out of a dollar and for the kids.”

From putting together the Angel Tree, which ensured children of faculty and staff members received at least one present during the holidays, to all of the lives she helped with, students and faculty said her impact on the college and district is vast.

Janice Hicks, dean of student success, said Hampton was a genuine caregiver and would do anything to make sure people’s needs were met.

“I will look to her spirit when I need a sense of comfort or need to keep fighting and advocating for my students,” she said. “When I feel like I can’t give anymore, I’ll just give a little more, because I know that’s what she would do.”

Hampton is the second daughter of four and was born in 1963 on an Air Force base in Germany. She is survived by her husband of 34 years, James; her son J.C. and daughter Christy; seven grandchildren; two sisters; and her two “big-headed babies,” Pudge and Spooky Boo.