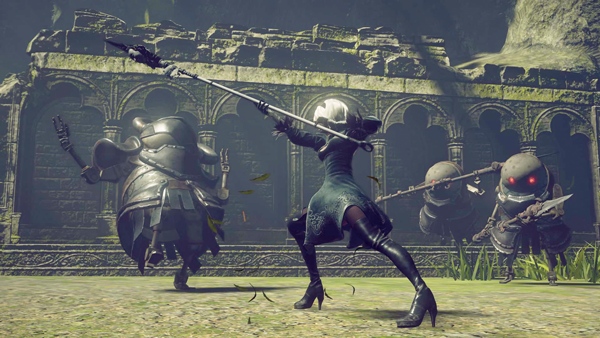 To call “Nier: Automata” my dream game wouldn’t be an exaggeration. A rather indirect sequel set more 9,000 years after my beloved cult classic “Nier,” “Automata” is an unlikely union between notorious Japanese game director Taro Yoko and developer-of-all-things-
fast-and-flashy Platinum.

I’ve been a fan of Yoko’s work since the delightfully demented train wreck that was the original “Drakengard,” a Z-grade “Dynasty Warriors” clone that played like a slideshow and had a soundtrack reminiscent of someone flinging an orchestra into a tumble dryer, but it was nonetheless worth remembering.

Few JRPGs would saddle you with a party comprised of a mass-murdering dragon fetishist, a child-eating elf, a self-loathing pedophile and a 6-year-old war orphan.

But I digress. The “Nier” games actually have direct ties to “Drakengard” (albeit via a joke ending that involved our for-lack-of-a-better-term heroes getting shot down by the Japanese Air Force), and while knowledge of the previous “Drakenier” games isn’t vital in understanding the plot of “Automata,” it can certainly help you understand Sith Lord Yoko’s brand of melancholic madness.

Trading fantasy for science fiction and magic for M16s, the world of “Automata” is in a rather sorry state after an extraterrestrial invasion has left the post-apocalyptic setting of the original “Nier” in even direr straits. What’s left of the human species has fled to Earth’s moon, and it’s up to an army of ridiculously pretty androids to slap the machine invaders off the planet.

You’ll play as a number of colorful characters throughout “Automata,” each with their own unique fighting style, but you’ll be spending most of your time with 2B, a no-nonsense combat android often accompanied by her Gatling-toting robot buddy Pod 042 and reconnaissance android 9S, who doesn’t allow his genuinely kind and cheerful personality to put a damper on his enthusiasm for robot genocide.

“Automata” is ostensibly an action RPG with a sidequest-riddled overworld, but it frequently switches up gameplay styles in homage to the original “Nier,” which featured bullet hell elements, side-scrolling and even brief choose-your-own-adventure style text segments that feel a lot more cohesive here.

Combat at its core is a standard, if very polished, hacky-slashy affair. You can switch between a number of swords, spears and bracers for close-range attacks while leaving long-range fighting to your AI-controlled partner and Pod. You can also modify your character to affect everything from your HUD to your combat ability, and if you’re the type to like ketchup with your steak, Easy mode lets you install chips that have you attack and dodge automatically.

Every game in the “Drakenier” series employs the “branching” system, a series of consecutively unlocked endings that often build on one another until you have a complete picture.

I’m personally a huge fan of a system that is constantly subverting your expectations. 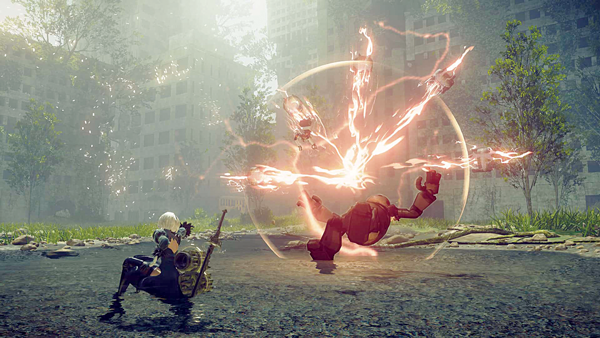 “Automata” does things a little differently by having its endings set in chronological order. (Its main endings, anyway. There are 21 hidden joke “endings” that fast forward you through the closing credits and spit you back at your last save for doing everything from ripping out your OS chip to fleeing from the final boss to go fishing.) Branch A concludes on a rather cheesy note with everyone smiling brainlessly off into the horizon, and I was quite disappointed by an what felt like otherwise “safe” ending until I got to Branch B, which casts the A path in a much more sinister light by having you play from a different perspective.

Then Branch C bowled me over with a plot twist as abrupt as it was ruthless. The game suddenly delved headfirst into psychological horror, jarring in a good way, and no character was safe from the carnage as loose plot threads finally started to tie into place.

While the writing is certainly among the best in the series, I wouldn’t quite call it perfect. The game admittedly started to lose me around the time we were introduced to a robot death cult, and I’m sure I’ve secured my place in hell for laughing at a bunch of robot children committing mass suicide for no particular reason.

I also had a problem with the central villains: twin brothers of dubiously incestual relations Adam and Eve (I’m willing to let that one slide since the character who named them is canonically established as a pretentious gasbag).

In any other Platinum title, these two would be right at home waxing poetic while stapling shiny scraps of leather to their lithe anime bodies. Here, they actively detract from the game. They’re enjoyable characters, but they feel very out of place. Picture technopunk Skeletor making a surprise appearance 10 minutes into “No Country for Old Men.”

Before now, I would only have recommended the “Drakenier” series with a big, fat “If you’re into that sort of thing” qualifier.

The gameplay was always its weak point, and if the “Drakengard” games are about the dregs of humanity banding together to fight for the greater good, the “Nier” series revels in forcing otherwise good people into truly reprehensible roles.

“Automata” is different because it’s the first in the series to have both genuinely fun gameplay and a budget to support its more innovative ideas.

I’m still not quite sure how we went from a merry trek through Grimdark Fantasy Edgeville to robots punching robots on the moon, but I’m glad it exists and will never stop throwing money at it.