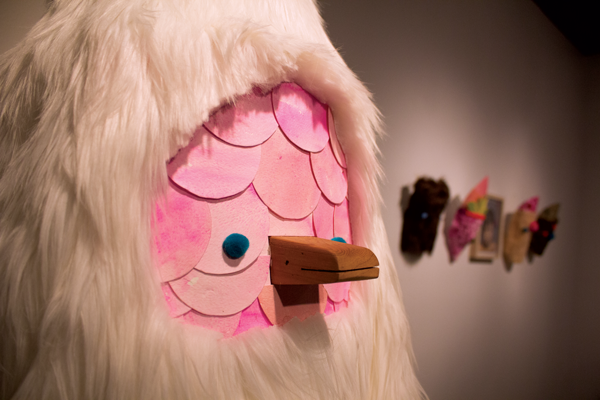 ‘Just Be’ was inspired by Donjuan’s personal story of immigrating from Mexico as a child and explores “his fears of not belonging, failure, and even his own mortality.” Photo by David Sanchez/The Et Cetera

From bold, vibrant colors to soft pastels; from photography series to installation pieces, the new art exhibits featuring work from outside artists use a diverse range of media and subject matter.

“I grew up in a garden,” Roomiani said. “Nature speaks to me.”

Roomiani collects specimens from around her neighborhood and carefully arranges them inside tubes and jars displayed on shelves. She also uses digital photography, creating collages from her photos of nature, then manipulating the image and altering the colors to make them more vivid.

“[I inspect] specific items, and then that inspires a piece,” Roomiani said.

Roomiani also has a series of rock-like objects that appear to be natural, but she actually makes them herself.

“I had to carve original objects, then make a mold and then pour the resin in it, mix it all up, add different colors, and then I went in and manipulated some of it,” Roomiani said.

Roomiani’s favorite project was her natural botanical dye prints. The prints are dark and look like galaxies, colors expanding and bleeding onto one another.

“It’s made with vegetables and plant material, and I secreted the dyes from it so it dyed the paper,” she said. “It’s a surprise every time I open it up because I never know what it’s going to look like.”

Roomiani earned a Bachelor of Fine Arts from the University of North Texas as well as a business degree. She works as a professional printmaker and illustrator.

The work on display depicts masked people to represent a feeling of alienation, he said. Many of Donjuan’s pieces are untitled, including a large white headdress. The mask is enormous, white and furry with a pink, scaly face and tiny blue pom-poms for eyes.

“It’s more about embracing who you are and your culture,” Donjuan said. “It started from that idea of immigration.”

Donjuan moved to America at 3 and grew up in the United States. He draws inspiration from his experiences as an immigrant, much of his work depicting the idea of what it is to be “alien.”

He believes his artwork will resonate with people, especially if they have ever felt like they don’t belong.

Donjuan earned a Master of Fine Arts from the University of Texas in San Antonio. He teaches painting and drawing at UT-Arlington and El Centro.

The subjects in most of Donjuan’s paintings and photographs are people he has a personal relationship with. However, he used some of his students as models for the “Just Be” photo series.

Iris Bechtol, Eastfield’s gallery coordinator, believes the exhibits will inspire students to use a variety of media.

“The diversity of materials that each artist is exhibiting is really great for the students,” she said.

Seeing successful artists working in a variety of media can help students with their own art projects, Bechtol said.

Rafael Tamayo observes the artwork in the ‘Just Be’ exhibit in H101. Photo by Jesus Ayala/The Et Cetera

‘Just Be’ is exhibited in H-100 and runs until March 2. Photo by David Sanchez/The Et Cetera

‘Just Be’ is being exhibited in H-100 and runs until March 2. Photo by David Sanchez/The Et Cetera

A student visits the ‘Just Be’ exhibit during its Jan. 26 reception in H-100. Photo by David Sanchez/The Et Cetera

Shamsy Roomiani’s ‘Botanica Spectrum’ takes a the artist’s deep connection from nature and is “part scientific documentation and part reinvention of the natural world.” Photo by David Sanchez/The Et Cetera.

Shamsy Roomiani’s ‘Botanica Spectrum’ takes a the artist’s deep connection from nature and is “part scientific documentation and part reinvention of the natural world.” Photo by David Sanchez/The Et Cetera.

‘Botanica Spectrum’ is exhibited in F-219C and runs until Feb. 23. Photo by David Sanchez/The Et Cetera

A crowd gathers during the Jan. 26 reception of ‘Botanica Spectrum’ in F-219C. Photo by Jesus Ayala/The Et Cetera