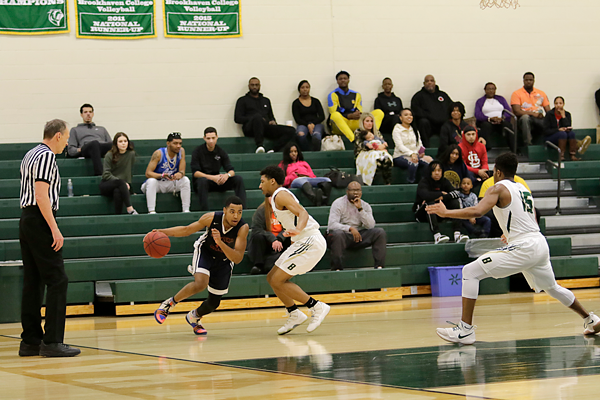 By JULIO VEGA
@JulioVegaETC
The Eastfield men’s basketball team won the regular season conference championship after an 74-70 road win at Brookhaven Saturday. The team goes as the No. 1 seed heading into the Metro Athletic Conference tournament. The final seeding for conference:

The conference tournament will be played Feb. 20-24. The first round games were played at Richland College Feb. 20, where No. 3 Richland defeated No. 6 Cedar Valley 93-71 and No. 5 Mountain View upset No. 4 Brookhaven 91-75.
Eastfield and North Lake both had first round byes.
The semifinal games will be played Feb. 22 at Eastfield’s gym in P100. North Lake will play Richland at 6 p.m. while the Harvesters will face Mountain View at 8 p.m.
The two winners of the semifinal will face off in the championship match Feb. 24 at 2 p.m.
If the Eastfield wins the tournament, they are declared MAC Region V champions and will travel to the national tournament in Lock Sheldrake, New York. If any other team wins the MAC tournament, then a final game between Eastfield – the regular season winners – and conference tournament winners will take place Feb. 26 at 7 p.m.
This story was updated to include the results of the first round games that took place Feb. 20.
Follow Julio Vega on Twiter for live updates of the Feb. 22 game
Tweets by JulioVegaETC