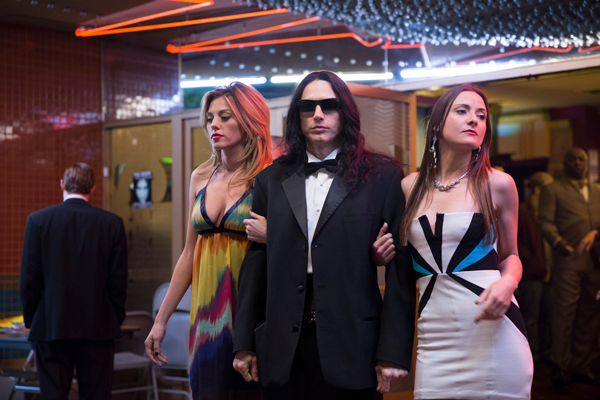 “The Disaster Artist,” which tells the almost-unbelievable tale of the worst Hollywood movie ever made, stars James Franco as the infamous Tommy Wiseau. Photo courtesy of A24

In a Hollywood-era, and fall season, in which recreating old subject matter is the only sure way to get asses in theater seats, James Franco and Seth Rogen are likely to turn the holiday movie season on its head by recreating old subject matter with “The Disaster Artist,” a biographical comedy-drama about the making of the best worst movie ever made: Tommy Wiseau’s “The Room.”

You couldn’t have predicted it if you tried. The thought of pairing Franco and Rogen’s usual low-effort stoner-comedy filmmaking with Wiseau’s incoherent creation seemed like a dream that was destined for failure.

Even in an alternate-dimension, who would have thought the “Pineapple Express” crew would not only plunge headfirst into recreating Wiseau’s infamous persona and succeed, but that they would also have the guts to release it in the middle of “Justice League” and “The Last Jedi?”

The film’s main source of inspiration, aside from “The Room” itself, is “The Disaster Artist: My Life Inside The Room, the Greatest Bad Film Ever Made,” a biographical book written by Wiseau’s friend and supporting actor for “The Room” Greg Sestero, who in the film is played by Franco’s brother Dave.

The film kicks off in the subtlest, yet most unusual, of ways. An array of Hollywood A-listers sit down to speak about their love for “The Room,” with the comments ranging from “It’s super strange and enjoyable” to “It’s a Shakespearean masterpiece that changed the cinematic landscape as well as my life.”

The deliveries in this scene are hilarious and ridiculously blur every line between what is serious and what is comedy, what it means to simply enjoy a terrible movie or to be truly inspired by its audacity.

The balance of the movie’s contrasting elements are carried out consistently throughout the film and undoubtedly becomes its best attribute.

Franco, who produced, directed and stars as Wiseau, insures the film is not only about the sheer lunacy that was filming “The Room,” but that the story is carried by Wiseau and Sestero’s roller coaster of a friendship.

Ultimately, both men were chasing the same seemingly unreachable Hollywood dream. Both of them seemed to lack what it took to make it big, yet both have an unrelenting passion for cinema.

We relive their persistence time and time again in the first half of the film, from the San Francisco acting workshop they meet in, to their early push into the business when they arrive in Los Angeles, and, after months of rejection, in the decision to make their own movie.

What ensues after is truly a circus.

The movie flaunts skillful filmmaking on most, if not all, fronts. The tight script and close-up shot selection are behind the film’s seamless balance between the ridiculous and the sentimental.

The cinematography is sleek and the editing is generally steady and subtle, both big departures from the typical Franco-Rogen style. They also offer, despite a few slow transitions, a more grounded feel to the film.

These elements keep the Franco brothers’ impeccable chemistry and comedic delivery at the center of attention. Dave portrays a nervous and often sheepish Sestero. As the everyman, we see a journey through ambition and the general goodness he fosters bleed through the screen, attaching us to him every step of the way.

James’ portrayal of Wiseau may be the farthest the actor has gone outside of his acting range, and he does a remarkable job.

There is a moment or two when his mannerisms are more James Franco than they are Tommy Wiseau, but this is salvaged by his spot-on accent.

For a movie centering on a catastrophic film set, the cast behind the endlessly frustrated cast and crew of “The Room,” which include the likes of Rogen, Josh Hutcherson, Zac Efron and Hannibal Buress, they seem to have had the time of their lives making this movie. They try to hold everything together despite Wiseau’s antics, the crew is the voice of normality to help measure the director’s volatile absurdity.

This film was my most anticipated of the year, and it does everything a film like this should do. A24 has yet another hit on its hands, one that is sure to please the masses and may even give the relatively young company its second Best Picture nominee in a row.

It makes sense for this film to be creating the splash that it’s making. The movie itself, and its pitch perfect marketing strategy is a breath of fresh air.

It plays into the absurd real-world comedy that Marvel can’t fully tap into. Unlike our binge-worthy TV shows and favorite galactic opera, the film’s joy is in its train-wreck of a main character and its celebration of failure as success.

So grab your spoons and serve yourself a tall glass of Scotchka, because “The Disaster Artist” deserves your attention and all the praise it gets. Also, stay for the post-credit scene.