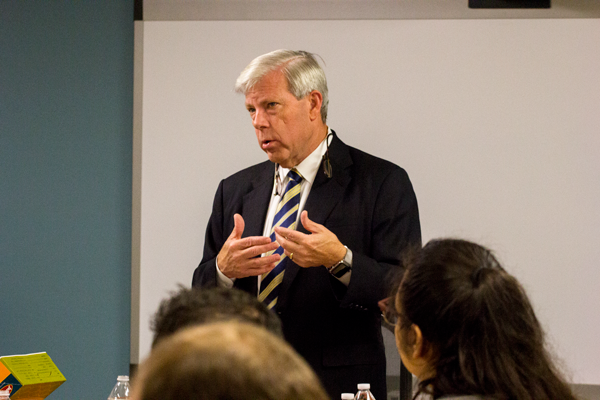 Chancellor Joe May is scheduled to retire in August 2022. The Et Cetera file photo


By JAMES HARTLEY
@JamesHartleyETC
Free college is a part of a plan to increase the percentage of Dallas County residents with post-secondary degrees or certificates, Dallas County Community College District Chancellor Joe May said.
The Dallas County Promise is a tax-free plan to offer free tuition to graduates of 31 Dallas-area high schools that have agreed to participate in the program. In order for high school students to take advantage of the program, their high schools must have committed to join Dallas County Promise. The program is a part of the DCCCD’s goal for 60 percent of Dallas residents to have a post-secondary degree or certificate by 2030.
Students must take a pledge to apply to a DCCCD college, apply for financial aid and register for classes by specific dates. Students will also have to provide information like a Social Security number, date of birth, home address and information about race and gender.
[READ MORE: Eastfield reaffirms dedication to 8 week terms]
The Dallas County Promise will pick up the tuition costs left over after students apply for financial aid and scholarships, even if they do not receive either. The program will cover costs up to three years or to degree completion, which ever comes first.
May said the program is a part of an effort to combat growing poverty rates in Dallas County. Despite Dallas having the fastest growing economy in the nation, May said low levels of education keep many Dallas area residents from pursuing a rewarding career.
“A big part of our population is being left behind from that, particularly those from minority backgrounds,” May said. “Those whom English is not their primary language and those who did not graduate from high school are being left behind. While we have growth on one hand, we also have accelerating poverty on the other growing at a rate third only to Detroit.”
The DCCCD has a goal of having 60 percent of Dallas County residents educated with a degree or certificate from a post-secondary institution. The Dallas County Promise will play a role in achieving this goal, May said.
Hunter Hunt, chairman of the DCCCD Foundation, which is funding the Dallas County Promise as well as various scholarships available for students, said during a Board of Trustees meeting the foundation is excited about the program.
[READ MORE: Executive action leaves student lives in limbo]
“This is something that has really galvanized us and energized us in ways that I think will be very helpful to a number of students and people across Dallas County,” Hunt said at the board meeting. “The Foundation board is incredibly supportive of the 60 [percent] by [20]30 goal that y’all have. It is absolutely critical to the businesses, the non-profits, the people represented by the foundation. There’s a strong belief that the success of Dallas County, in many ways, is going to be determined by the success of the DCCCD.”
The promise program is based on the America college promise to provide free college to all Americans. The plan died with the Obama era, prompting DCCCD officials to look for a way to make college more accessible to the community.
Mentoring, financial assistance and retention will all be a part of the Dallas County Promise program.
“It is a scholarship and it is last-dollar tuition, but it is much more than that,” said Pyeper Wilkens, chief of executive initiatives for the DCCCD foundation. “Success coaching in our district … is really being developed right now as we speak. With navigators that we are putting in place, the whole new redesign of student services that help students stay engaged and stay in college once they’re here. And then career pathways.”
Career pathways will help students find a job once they are out of college by making sure they are working toward their future career from the start of their college career.
Other programs the district hopes will help them reach the 60 percent by 2030 goal include Rising Star, Level Up and the early college high school programs. Dual credit programs outside the early college high school programs is also growing, allowing homeschoolers and students attending high schools without an early college program to get college credits during their high school careers.
https://eastfieldnews.com/2017/10/03/unt-dallas-eastfield-begin-dual-enrollment/
Delete Image
Align Left
Align Center
Align Right
Align Left
Align Center
Delete Heading