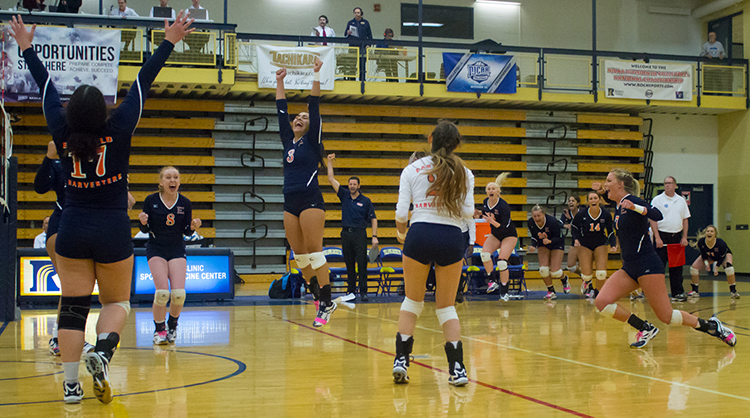 Note: This story was orignally published on The Et Cetera’s sports blog, Et Cetera Sports. For a photo gallery and more coverage, click here.
By JULIO VEGA
@JulioVegaETC
ROCHESTER, MINNESOTA — Eastfield led the match 2-1. Fourth set. Match point. Kirsten Fredrickson dug the ball from a Harper serve to Kalli Caddell, who sets it for Keishla Reyes toward the left side of the court.
Reyes said she knew what was about to happen.
“When she set me, I thought, “Let’s go. I’m getting this point,’ ” she said.
Reyes hit hard to other side. The ball bounced off the hands of the blockers and out of play, giving the Harvesters the national title.
The Eastfield volleyball team became the first women’s team in school history to claim a national championship. They beat defending champions Harper in four sets (25-21, 22-25, 25-21, 25-17).
Coach Brandon Crisp said the feeling was surreal and still struggled to take it all in,  but said he finally feels relaxed.
“Now that the season’s over with, I can finally take a breath and have a sigh of relief that we got it done,” he said. “It feels great and we’re happy with what they did. I’m just so happy for the girls.”
In the first, Eastfield took an early lead but Harper trailed throughout the set. They kept the score close and finally took the lead 19-18, but the Harvesters reacted by winning six of eight points to take the set.
The second set saw both teams battle through the first half and neither team took more than a two-point advantage. Harper broke the deadlock by scoring four straight and leading 18-14 and not giving up the lead to win it.
Crisp said the team looked flustered that set and he told the team that they looked like “chickens with their heads cut off running around.”
Eastfield responded in the third set by scoring four consecutive points and winning 10 of 15. Harper did close in on the Harvester’s lead, trailing by one point on three occasions, but Payton Costlow got three straight kills to win the set for Eastfield.
The final set opened up with a long rally that ultimately went in Eastfield’s favor. They held on to the lead and never looked back, winning six of the last nine to win the match.
Costlow said the victory meant so much to the team and after last year’s third place finish, they had their sights sets higher.
“This year coming into it, we knew it was possible,” she said. “This was our goal all along and actually achieving that goal is amazing and breathtaking.”
Caddell and Costlow were named into the Team of the Tournament. Reyes was named the Tournament Most Valuable Player. Crisp was named Coach of the Tournament.
Delete Image
Align Left
Align Center
Align Right
Align Left
Align Center
Delete Heading