Marvels of universe can be found microscopically 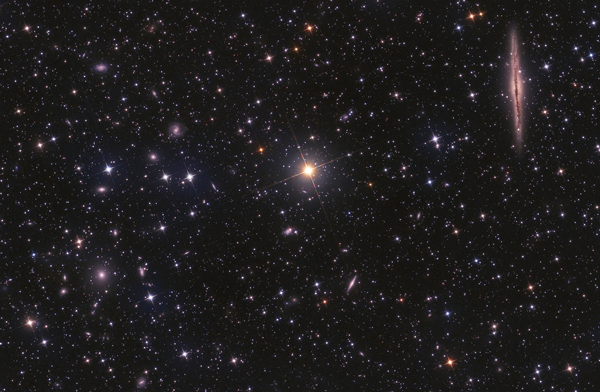 Distant galaxies lie beyond a foreground of spiky Milky Way stars in this telescopic field of view. Courtesy of NASA (Laszlo Bagi)

It’s common knowledge that there’s a universe that surrounds us. Most people don’t know that there is also a universe within us.

There are two known universes: the macro universe and the micro universe.

The macro universe is everything that we know or don’t know that exists outside of our planet, solar system and galaxy. It’s an unimaginable spectacle of life far from what our eyes can capture when we look up at the sky.

Picture yourself leaving Dallas, leaving Texas, traveling outside of the U.S., shooting into space with the stars. You pass by the moon, but that isn’t the stopping point.

Flying past the Kuiper Belt to exit the Oort cloud and boom, you’re entering interstellar space. You know, those swelling white dots in the sky at night that are surrounded by infinite darkness.

Journey past the Sagittarius spiral arm, looking back at the Milky Way swirling towards Andromeda. In this voyage, when you finally flow outside the super cluster and past the cosmic web, you’ll see the aftermath of the nuclear explosion that is our creation. Absorb that vision of the universe.

If you ever wondered, “What is life?” this is it.

Travel down from the universe past the infinite galaxies and forms of life. Crunch back into the Milky Way’s spiral arms, avoiding the dwarf planets and migrating back inside the Kuiper Belt.

Move toward Earth and see the rest of the planets rotating around the center of life. Finally, you get to Earth and back to Dallas. Now you’ll discover the micro universe.

This is quite a different universe than the one we know about. It lives inside of us.

Let’s start at your eye, zoom in past the pupil into the retina. Closing in on your veins separating the white and red blood cells that transport the oxygen and nutrients to your lungs. This is the source of your living; keep digging inside to see what else we can find inside this hidden universe.

Check the chromosomes living inside the white blood cells. You can see that the chromosome is a 10-nanometer tube with a twisted ladder at the end of it. This is deoxyribonucleic acid, or DNA.

Let’s return to the chromosome to access inside. We find atoms, oxygen atoms. These atoms are electrons with protons and neutrons inside of its abyss.

We see quarks, which are particles that carry an electronic charge. There are trillions of these inside of your body.

For you to even move your arm upward it takes trillions of these microscopic forms of life to work together for you to make that gesture. That is absolute insanity, but it’s reality.

We can think about how mad it’d be to see an image of everything outside of Earth and beyond because of how enormous the universe is.

We, the human species, are such a small factor of actuality inside this everlasting enigma that we call life.

That’s mind-blowing. But imagine being a particle inside a living being feeling the same way to then realize that the person you live inside of is not the grandest life form.

There are objects that are larger and full of life. Take that knowledge back into our reality. The universe we live in may not even be the most imposing force. There may be others like it or even more magnificent.

It could be a multiverse. But what if that’s not even the biggest living thing out there?