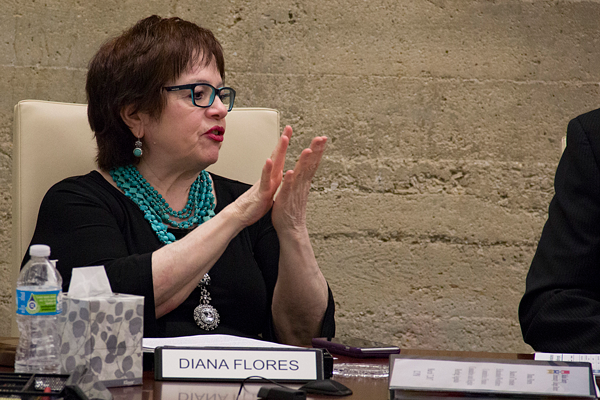 Diana Flores, trustee for District 6, debates with other trustees at the March 2017 meeting. Photo by James Hartley/The Et Cetera

The budget for the Dallas County Community College District will be brought to a vote in September along with several policy issues including maternity leave and vacation days for employees.

The Board of Trustees tabled a set of policy amendments until the September board meeting after a budget workshop ran long and trustees did not have the opportunity to discuss or ask questions about the changes.

Here’s a look at what the board will be voting on:

The proposed budget for the 2017-2018 fiscal year will see no increase in tuition or taxes, but includes a raise for all full-time employees.

Although the tax rate won’t change, rising property values in Dallas County mean the average homeowner would pay about $15 more in property taxes than last year.

The DCCCD operating budget is $437.4 million, a 3.6 percent increase from last year.

The budget includes a $3 million increase in funding for dual credit programs and a 3 percent salary increase for most employees.

Free DART GoPasses for DCCCD students will continue, with an increased cost of $200,000 from last year.

DCCCD’s current maternity leave policy allows only one day away from work: the day the mother has given birth.

Each additional day away from work draws from vacation and sick days.

After those days are expended, employees have to go without pay until they return to work.

The proposed amendment would make maternity leave four weeks instead of one day.

This change comes as many across the nation are calling for more generous or realistic leave policies, some even demanding federal action to require employers provide a minimum number of days off for new mothers.

Staff at DCCCD colleges may soon be able to earn more vacation time at a quicker rate.

This amendment is a part of DCCCD efforts to make the district a more competitive employer.

The board plans to finalize the budget and tax rate and vote on the policy changes at its next regular meeting Sept. 5.

[READ NEXT: Bill to reform developmental education signed into law]