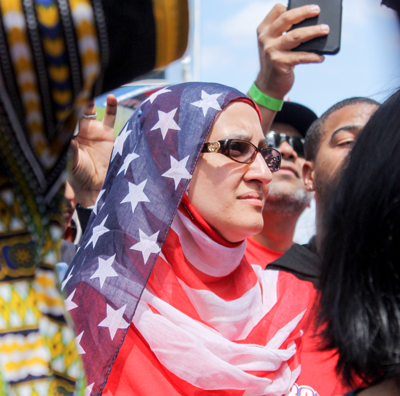 A protester dons an American flag hijab during the April 9 march. The event was a demonstration against President Donald Trump's recent immigration policy, which has conflicted with the views of advocates for undocumented immigrants and middle eastern refugees. Photo by Heidi McCaslin


More than 3,000 people marched through downtown Dallas in support of immigrant rights April 9.
The Mega March was far smaller gathering than the original Mega March 11 years ago, which drew more than 350,000.
The Mega March had a more diverse gathering than the previous with advocates for international refugees and the rights of undocumented immigrants in attendance.
Community leaders speaking at the Mega March included activist Martin Luther King III, Congressmen Joaquin Castro and state representative Victoria Neave.
Counter-demonstrators gathered near the end of the march with American and Trump campaign flags.
No arrests were reported.