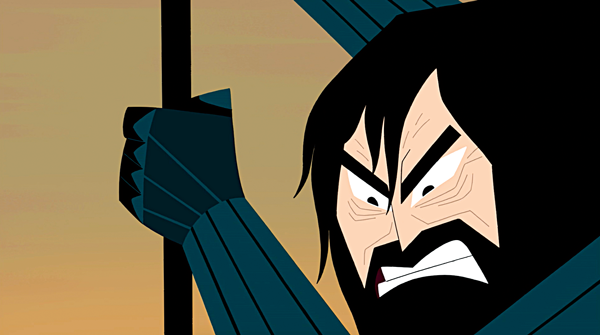 “Samurai Jack” returns with a new, mature spin on Jack’s struggles, both internally and externally. Photo courtesy of Time Warner.

Editor’s note: Spoiler alert. Jack is back, and he finally has a gun.

It’s a rare treat for people like me, who grew up in the ‘90s and early 2000s, to get a conclusion this good to a beloved childhood cartoon. Many shows of that era simply ended on a cliffhanger or even halted production altogether to make way for another newer, shinier show. For 13 years, “Samurai Jack’s” fate was the same.

“Samurai Jack” is a story about a samurai warrior wielding a magic sword in order to defeat Aku, an unspeakably evil master of darkness. Before Jack was able to strike the final blow, Aku tore open a portal in time and flung him into the future where Aku’s evil is law. Fast-forward to season five. Fifty years later, Jack still hasn’t found a way back to the past in order to prevent Aku’s evil. The problem is Jack now has to do it without his magic sword, the only thing that could hurt Aku.

In an era of cartoon reboots like the 2016 “Powerpuff Girls” and “Teen Titans Go!” which may have us distancing ourselves from ever having liked cartoons in the first place, one might dread the return of our beloved samurai warrior. The series was cancelled before seeing a conclusion, so instead of finding out what happens to Jack, we only got to see bits and pieces from his life after he was thrown into the future.

After such a long absence, “Samurai Jack” fans desperately craved more. We yearned for an element of maturity and a well thought-out conclusion.

That’s exactly what we’re getting.

After a healthy binge of the first four seasons, which originally aired from 2001 to 2004, I had high hopes for what the new season would bring. “Samurai Jack” was known for its unique art style, which relied heavily on blocks of color to build the shapes of the characters and the world surrounding them. One may fear that its art style wouldn’t hold up well to today’s standards. A lot of cartoons these days rely on smooth linework and bright colors regardless of the mood of the scene to convey their stories. I argue that it’s a refreshing crash course in color theory that other producers should pay close attention to. The new season of “Samurai Jack” exceeded my expectations by sticking to an improved version of the show’s previous style.

The show also consistently uses excellent sound design. One of the songs in the second episode actually had me thinking they were going to kill off Jack even though I knew there would be 10 episodes in the new season. Not only are the music and sound effects carefully planned, but the show knows when to use silence to induce certain emotions.

The pacing is also planned out really well. Rather than insulting us with stupid fillers, the show makes a point to significantly advance Jack’s story with each episode.

The new season explores themes of struggling with identity, the introduction of gray morality and questionable ethics, maintaining your original purpose and even the will to survive. Jack starts having hallucinations about his past, and since Aku hasn’t shown himself in years, Jack now struggles with maintaining his mental fortitude. He also comes to terms with killing a human being for the first time.

There are a few really cool scenes where Jack hallucinates conversations with his former self, whom we used to look up to as a moral compass. His past self is now a tired and bitter spirit, ready to tell Jack that the only honorable thing left to do after all this time is end his own life.

If you’re familiar with the series, you would expect Jack’s past self to be the one thing to keep him going and remind him of his original morals and values, but the opposite is almost always true when we see him.

It shows us that this new “Samurai Jack” is different from the one we grew up with, but it’s the perfect kind of story to tackle some of these new themes.

For me, watching “Samurai Jack” has become an integral element to my weekly routine, and I feel lost if I’m even a little delayed with my viewing. Since April Fools’ Day happened to fall on Saturday this year, Adult Swim decided it would be funny to fling “Samurai Jack” another week into the future. I would have reviewed that episode, but instead we got hours of the season three premiere of “Rick and Morty.” Needless to say, I was pretty distraught.

The show’s beautifully rendered style has done nothing but improve over time as creator Genndy Tartakovsky directs an amazing staff of artists and writers to complete Jack’s journey. The music and sound effects (or artistic absence thereof) always get my heart pounding. Exploring Jack’s character by juxtaposing a demonized version of his past self with a tattered, tired version of his current self is a new, mature element. Since there won’t be any more seasons after this, you can tell the creators put a lot of care into making sure the last we’ll see of “Samurai Jack” will be meaningful. To give it anything less than five stars would be disrespectful.