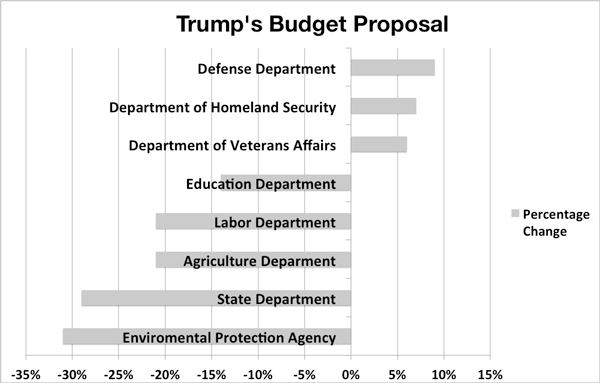 
By DAVID SILVA
@DavidSilvaETC
President Donald Trump’s recently proposed budget for 2018 would have a direct impact on Eastfield’s TRIO program and is a cause for concern among art and science professors.
The budget proposal includes major cuts to the Environmental Protection Agency and Education Department, eliminates four cultural agencies and increases spending for the Defense Department, Department of Veteran Affairs and the Department of Homeland Security.
Revealed on March 16, the proposal details the changes suggested to Congress, initiating the first step of the budget process.
President Trump’s plan proposes “significant” reductions to the federal work-study program and would cut an estimated $193 million from TRIO, a federal outreach program designed to provide academic aid to disadvantaged students.
Although this is only a proposition, the budget gives Americans a glimpse of the administration’s priorities.
“Everything is in the process of change,” TRIO coordinator Bobbi White said, “You don’t really know what’s going to happen. The prediction is a 10 percent cut to all budgets. That would be a big hit for us, and I don’t know how we’re going to manage that.”
TRIO is part of an umbrella program with Upward Bound, Talent Search and Student Services Support at Eastfield.
[READ MORE: Americans protest, celebrate Trump win]
Upward Bound aims to provide high school students in low-income areas with an opportunity to attend college. Talent Search spotlights students who might benefit from  strategies in order to pursue college. Student Support Services assists college students with completing their degree.
A 10 percent cut to TRIO at Eastfield would be about $30,000, White said.
Critics of the TRIO program often question its effectiveness. In 2004, the office of management and budget’s Program Assessment and Rating Tool deemed some agencies in TRIO to be only moderately increasing college enrollment and graduation.
Recent evaluations by the Education Department show that Talent Search and Student Support Services showed a positive impact on applicants, while Upward Bound was concluded to have no detectable effect on the rate of college enrollment.
White said the budget proposal doesn’t state where the cuts will be made. Nationally, TRIO has seven programs that vary in perceived importance by voters and member of Congress.
“The McNair program is one that’s under scrutiny because it’s for graduate students,” White said. “A lot of people think, ‘Well you’re in graduate school. You’ve gotten one degree. Go work and earn that degree.’ So I don’t know what’ll happen.”
White is aware of the criticism for TRIO at the federal level, but she feels confident in its effectiveness on campus.
“What we’re doing is serving students who have an academic need and don’t have family support,” White said. “We have a very high success rate.”
According to White, TRIO had a 58 percent graduation rate at Eastfield in 2016 with a transfer rate of about 44 percent.
“We’re stewards of taxpayer money, so we try to be very mindful of what we do with that money,” she said. “People who have that direct experience know that this makes a difference. People who didn’t go through college with that same academic need don’t understand the impact.”
Cuts that would eliminate all federal funding for cultural agencies including the National Endowment of the Arts, National Endowment of the Humanities and the Corporation for Public Broadcasting have turned heads on campus even though these cuts do not affect the college directly.
“It’ll have an impact on places like Dallas Shakespeare and Kitchen Dog [Theater] that do summer programs,” technical theater coordinator Lori Honeycutt said. “That’s eliminating a portion of their funding.”
Supporters of the cuts oppose federal funding for arts programs they believe should compete in the private sector.
The proposed cuts are projected to impact art programs across the country. Honeycutt thinks art programs will remain resourceful no matter the cuts.
“They will find a way to get art to kids,” she said. “As long as people seek out the arts, we will persevere.”
[READ MORE: Free speech area unused despite political climate]
The budget proposal also seeks a $2.5 billion cut to the Environmental Protection Agency, targeting climate change programs and environmental cleanup efforts, including a 50 percent cut to international research.
These cuts are consistent with President Trump’s criticism of the Obama administration’s environmental regulations and his controversial claim that climate change is a hoax.
Biology professor Pebble Barbero feels there is no debating the existence of climate change.
“It flabbergasts me,” she said. “To say it’s not doing anything right now is fine, but it’s the future generation that will be impacted by what we’re doing right now. To say it’s not true, you’re misinformed.”
Barbero believes that the White House’s budget proposal is designed to diminish the efforts of Barack
Obama’s presidency and will accelerate negative impact on the environment.
“Even though it may only be the next four years, I still think we’ll see the impact of a decreasing budget funds for that, for the arts, for education,” she said. “It’ll have detrimental repercussions.”
https://eastfieldnews.com/2017/03/28/review-new-eastfield-website-must-improve/
Delete Image
Align Left
Align Center
Align Right
Align Left
Align Center
Delete Heading