So What?! Music Festival Review: The Human Experiment has a lot of skill, has a lot to go 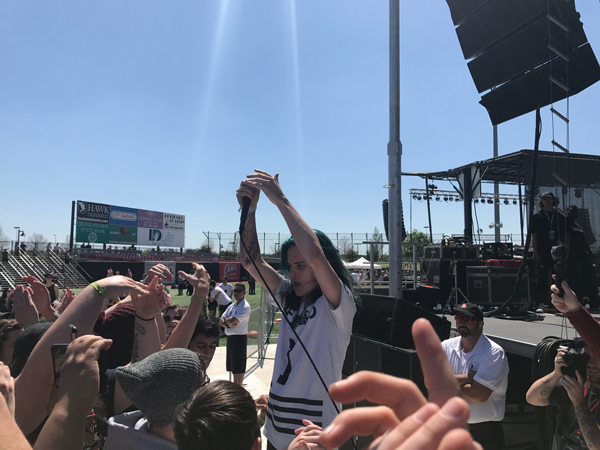 The Human Experiment performs at So What?! Festival in Grand Prairie. Photo by James Hartley/The Et Cetera


By LANDON WILLIAMS
@LandonETC
The Human Experiment definitely has good parts to their performance, but it’s hard to focus on what went well when there were so many places at which the band could improve. In order for a group to play at a festival like So What?!, they have to have some sort of talent. There is definitely musical talent in The Human Experiment, but there is also a lot of work that needs to be done.
The Human Experiment’s ability to produce crowd energy was apparent; people were moshing and singing along to every song.
While many of the screams from front man and vocalist were enjoyable, there were techniques he was trying with his voice that just didn’t work and brought the show down. There was also a point in the middle of the show when the lead vocalist voiced his disapproval for the entire United States government, which felt out of place. When a band tries to tackle issues like politics on stage during a show, they end up alienating part of their fan base, bog down the set and make it harder for them to make new fans.
The Human Experiment’s stage presence was great to watch. Each member used every inch of the stage and at the end of their set the lead vocalist stepped into the crowd and told the crowd to get close, which they did.
The music itself was great. You could tell that the members had spent many hours practicing their respective instruments. There weren’t any technical errors during the set at which the musical expertise of each band member was questioned, the entire band just needs to perfect the delivery of its live show.
The Human Experience is not a bad band by any means, they just need to refine their screams and leave politics off stage.
Delete Image
Align Left
Align Center
Align Right
Align Left
Align Center
Delete Heading