What’s Love Got to Do with It? A History of Valentine’s Day 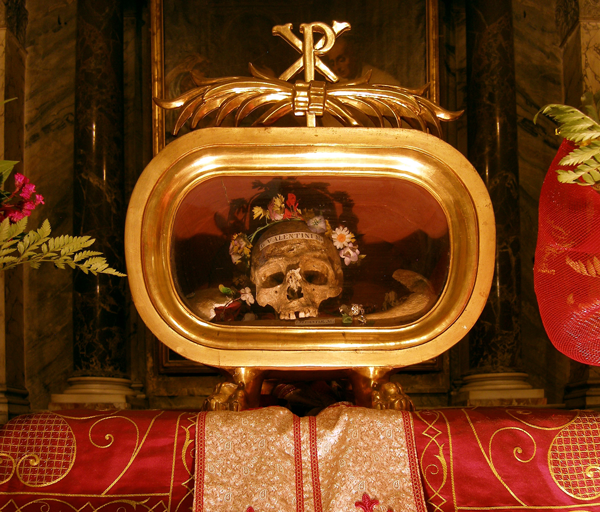 Part One: Forget Romance, Let’s Talk Fertility Rituals and Sacrifice
For the skeptic, Valentine’s Day is a holiday invented by greeting card companies to capitalize on the fool-hearted in love. For the romantic, it is a day for public declarations of devotion and if you’re lucky, a night for passion.
As it turns out, Valentine’s Day is a modern take on one of Rome’s most ancient holidays. Once known as Lupercalia, this celebration can be traced back to the oldest of Roman calendars, with many scholars claiming roots in Greek traditions taken over by their Roman conquerors.
Originally a three-day festival held from Feb. 13th to 15th known as Lupercalia, the Romans celebrated the end of winter and the birth of Spring with a plethora of rituals involving sacrifice and fertility ceremonies.
Traditionally a ceremony reserved for the elite and their priests, this was no Valentine’s Day dance. Priests, known as Luperci, led the festivities. Committed to the worship of Faunus, the god of wild nature and fertility, these were pagan priests.
The festivities kicked off with the Luperci sacrificing a goat and a dog, after which they adorned themselves in the skins of the sacrificed animals and wore them to a feast that followed.
After the Feast of Lupercalia, the Priests cut thongs from the skins and ran around the sacred Palatine hill. Using the bloody thongs as whips, they would strike at any woman who came near them.
Surprisingly, they didn’t have to try hard as women were more likely to run toward them than to run away.
This strike of the sacrificed animal’s hide was believed to make the women fertile and, in a time when infertility was considered a disease, women desiring children were honored at the opportunity to participate in the festivities.
The last phase of the Lupercalia celebration relates more closely to our modern traditions, but vaguely at best.
Once the Luperci confirmed the fertility of participating women, a matchmaking lottery ensued.
Elite young men, who could only serve as spectators up until this point in the festivities, drew the names of women from a jar. The couple would then be paired up for the duration of the festival, perhaps even longer if the match was right.
Satisfied with the history of success via the Lupercalia traditions, these rituals continued for centuries.
But in the third century, the vast Roman Empire faced internal divide with three competing states and the threat of invasion was all around. In need of all the manpower he could muster and with the belief that unmarried soldiers fought better than married ones, the emperor Claudius Gothicus, sometimes referred to as “Claudius the Cruel,” made a controversial and much opposed decision to ban marriage amongst young people.
Feeling that marriage was a God-given sacrament, a Christian priest named Valentine began to officiate marriage ceremonies in secret.
Defying an Emperor for any reason was certainly brazen, but in a time when Christianity was still illegal in Rome and followers met in hiding for all forms of worship, to defy Claudius in the name of the Christian God was the ultimate defiance.
In return, Valentine received the ultimate punishment.
Once discovered, he was jailed and sentenced to death by the Emperor. His beheading was carried out on Feb. 14th amidst Lupercalia festivities around the year 270.
Legend has it, just before his beheading, Valentine left a farewell note for the jailer’s daughter- whom he befriended during his stay- and signed it “From Your Valentine.”
The Catholic Church honored the martyrdom of Valentine with the dedication of St. Valentine’s Day shortly thereafter.
Under the reign of the Emperor Constantine, Christianity was made legal for the first time in Rome in the year 313.
Determined to replace pagan religions with Christianity, Catholic priests spared no time as they built churches across the vast empire and infiltrated the ruling class.
In the year 391, a major role reversal took shape, sending pagans into hiding as the worship of other gods was made illegal.
But the priests soon learned that old habits die-hard.
Scattered across the empire, small cults still practiced pagan rituals, including that of Lupercalia, although it become more a theatrical interpretation of what it once was.
In the 5th century, Pope Gelasius I combined St. Valentine’s Day with Lupercalia in hopes of replacing the pagan holiday with that of a Christian celebration, a replacement practice that would be capitalized on by the Catholic Church for centuries to come.

Part Two: Birds, Cupid, and Yearning Hearts
Over the centuries, the concept of Valentine’s Day grew sweeter and more reverent in its celebration.
It’s in Fourteenth century France and England that we really start to see the first signs of common customs and courtship associated with what know as Valentine’s Day.
During this time, people believed that Feb. 14th marked the beginning of birds’ mating seasons. We see this in the writings of poet Chaucer and his Parliament of the Foules in which he says, “For this was sent on Seynt Valentyne’s day whan every foul cometh ther to choose his mate.”
Many scholars attribute this writing to another superstition that dominated the Middle Ages relating birds, love and Valentine’s Day. It was believed that a woman could tell what kind of man she would marry by the type of bird she spotted on the holiday.
If she saw a blackbird she was destined to a priest, a bluebird meant her lover would be full of wit, a dove signified a kind-hearted man, and a goldfinch meant a man of wealth.
The most feared bird to spot was the woodpecker, which doomed the woman to an eternity of loneliness.
Shakespeare, with his flair for antiquity, also played an important role in modernizing and romanticizing Valentine’s Day celebrations with his writings.
Most notably in “Hamlet,” where he alludes to the superstition that if two young people meet on the morning of Saint Valentine’s Day, they are destined to be married.
In France, a romantic custom of the Middle Ages called “une loterie d’amour,” which translates to “drawing for love” inspired unwed neighbors to yell at each other from their windows announcing their availability in hopes of a romantic connection on the holiday.
The Renaissance era flourished in the 16th and 17th centuries and inspired many of our more modern traditions associated with Valentine’s Day.
Paintings were dominated by artistic images of Amorni, translated as “little love gods” that were inspired by classical images of Cupid, the Roman god of love.
It wasn’t until this time that Cupid and his bow make their first appearance in modern romance.
The traditional heart-shape that we now associate with love can also be found in Renaissance artworks, such as Donatello’s relief sculpture, “Miracle of the Miser’s Heart”.
The Valentine’s Day tradition of passing on handmade cards filled with sonnets of love and decorated with symbols of desire, often birds and Cupid-like cherub figures, also comes from this highly romantic era.
The British Postal Museum possesses the first known heart-shaped card from 1790 which reads “My dearest dear and blest divine / I’ve pictured here thy heart and mine,” a true Hallmark before its time.
The Industrial Love Revolution, Entrepreneurs at Heart
The mass production of sweet cards for lovers in America was coined first by Esther Howland in 1847.
Coined the “Mother of the American Valentine”, the seminary student and daughter of a stationary store owner received an elaborate Valentine letter from an English business associate of her father shortly after her high school graduation.
A contemporary of the poet Emily Dickinson, she was unimpressed and confident she could do better than her admirer.
After convincing her father and brother to back her entrepreneurship with the family business, she achieved immediate success as few could compete with her famed card artistry and inspirational poems.
While she wasn’t the first to produce an American Valentine, she was the first to capitalize on it with vast success and coined the idea of incorporating lace into cards, propelling the tradition of Valentine’s Day cards into a major industry.
As technology and industrialization flourished, they too transformed Valentine’s Day and helped many more entrepreneurs shape the holiday into the commercialized celebration we know today.
The Victorians of the early to mid 1800s had already fully embraced the celebrations of February 14th, but it was the contributions of Richard Cadbury that made the day even sweeter.  By this time, chocolate was already a popular trend in mass production.
A decadent staple for the wealthy and a rare treat for the less fortunate, people loved chocolate. Chocolate shops selling liquid chocolate cocktails were the modern equivalent to our coffee shops of today, where social mingling inside the shops was just as important as the product being consumed.
Richard Cadbury (heir to the Cadbury Chocolate business) first invented “eating chocolates” which he packaged in boxes he designed himself.  His marketing prowess was unmatched when in 1861 he created the first heart shaped box adorned with Cupids and roses for a limited Valentine’s Day run.
After the chocolates were consumed, a recipient could use the box to store mementos and love letters from the holiday.  The popularity of the heart shaped box was unparalleled and a new tradition was born.
As the turn of the century approached, mass commercialization of all holidays was on the rise and Valentine’s Day was at its height of commercial success.
Starting his business initially as a caramel maker, Milton Hershey adjusted his business model to the trends of the day when in 1894 he began covering his caramels in chocolate for the day of love.
In 1907, he launched the production of a new tear drop shaped chocolate.
He reportedly called them “Kisses” because of the smooching sound the chocolate made as it was produced on factory lines and they were advertised as “a most nourishing food.”
It should be of no surprise that the last famous entrepreneur to monopolize on the consumer obsession with Valentine’s Day is the most recognized and accredited for its popularization in modern culture.
In 1913, Hallmark Cards of Kansas City, Missouri began mass producing cards for the holiday and over the years has become a Valentine’s Day staple for lovers across America.
To set the record straight, Hallmark didn’t create Valentine’s Day, but were in fact the last to get on the love train.