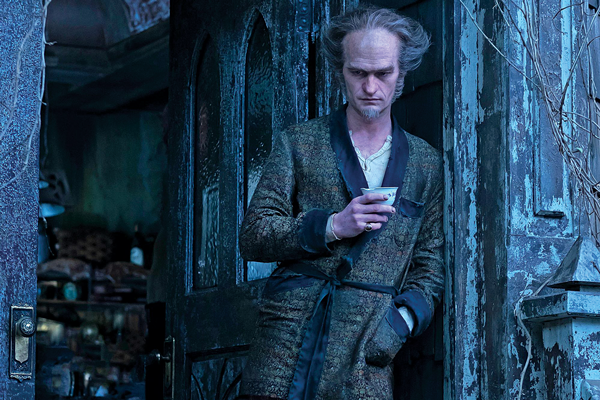 If you are looking for entertainment that leaves you feeling happy and content, do not watch “A Series of Unfortunate Events.”

If you are looking for a deep and meaningful mystery filled with secret organizations, answers that only lead to more questions and a broken-hearted crocodile, then look no further than this eight-episode season streaming on Netflix.

The best description for this show can be found in its title. There are no happy endings. There is no hope for the newly orphaned Baudelaire siblings. The few moments of joy make the depressing parts even sadder.

The show encompasses the despair that filled the original book series, written and “narrated” by Daniel Handler under the persona Lemony Snicket. The series far surpasses the 2004 movie adaption.

The first season covers the first four books in the series. From fierce and formidable leeches to a sawmill that’s in desperate need of a worker’s union, the orphans survive by taking care of one another in the darkest of circumstances.

Violet the inventor, Klaus the reader and Sunny the biter work together to take on increasingly haunting situations brought about by the despicable Count Olaf.  The Count was written to be a slightly goofy but sinister villain who leads a theater troupe hell-bent on stealing the Baudelaire’s fortune.

Neil Patrick Harris plays the role flawlessly. Harris lives and breathes theater which makes him perfect to play the Count. I believe the most important character in any story is the villain. Without a good villain, the story would be empty and meaningless.

Harris brings the Count to life in a way that Jim Carrey wasn’t able to do in the 2004 film. Harris uses over-the-top facial expressions and dramatic, theatrical movements to make you fall in love with the character.

The show is narrated by Snicket, played by Patrick Warburton, known for “Seinfeld” and his voiceover work in Disney’s “The Emperor’s New Groove” and “Family Guy.” Every time Snicket appears on the screen, you know your vocabulary is about to increase. He starts out each scene by giving the audience a new word or phrase, then explaining what it means and how it ties into what is going on in the orphans’ lives.

A few parts of the show do feel a bit cheesy, and the acting can sometimes feel overdone, but the great moments far outshine the bad. Part of me wondered if some scenes were meant to be cheesy on purpose. The orphans sometimes seem too happy, and Count Olaf’s acting troupe can be over-the-top.

In the end, every part fits together well, and the production team kept the original story mostly intact, so you won’t hear much complaining coming from me as a fan of the original books.

“A Series of Unfortunate Events” fits right in with the steady stream of amazing original content exclusive to Netflix.

The only disappointment you’ll be left with is when you realize you’ve finished watching all eight episodes in one sitting.