A Book to Consider: Society reminded of Big Brother amid tumultuous political climate 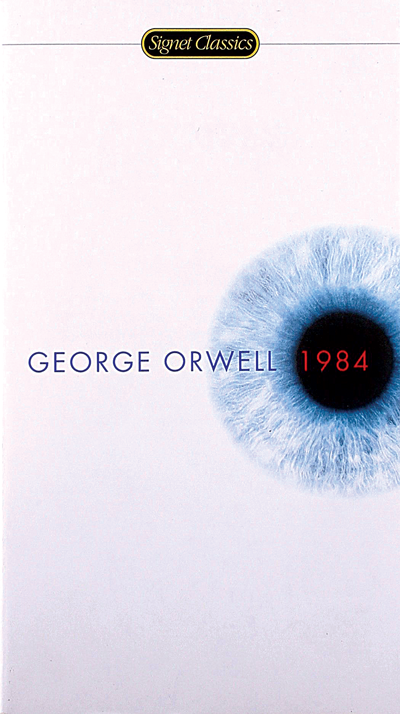 We all read (or pretended to read) George Orwell’s “Nineteen Eighty-Four” in high school English.
Whether you thought it was prophetic, poignant or just plain weird, there’s no denying that some parallels are occurring between the novel and our lives today, which may be why it has recently become the No. 1 selling book on Amazon.

Plot
In case you slept through the lecture, “Nineteen Eighty-Four” is a dystopian novel published in 1949 as a prediction of what life would be like if socialism and dictatorship took hold of the world. The book focuses on Winston Smith as he slowly discovers that the government he works for is brainwashing and lying to the public.
Smith lives in Oceania, which is what used to be Britain and America. The government, called “the Party,” uses everything in its power — constant warmongering, creating a new language, dictating marriage partnerships and rationing food — in order to control the people and their attitudes toward the government.
Author
Orwell is the pen name for Eric Author Blair, a British novelist, essayist, critic and journalist who died in 1950 at age 46. He was No. 2 on The Times of London’s list of 50 greatest writers between 1945 and 2008.
Orwell also penned “Animal Farm,” an anti-Soviet allegorical novella. His works have had a broad impact in popular culture. The term Orwellian describe totalitarian or authoritarian practices, and he coined the terms cold war, Big Brother and Thought Police.
During World War II, Orwell worked as a producer for the BBC, where he produced the same propaganda he denounces throughout his literary works.
[READ MORE: A book to consider: Meyer’s “The Chemist” steps away from writer’s reputation]
Critical response
When “Nineteen Eighty-Four” was originally published, “Brave New World” author Aldous Huxley wrote to Orwell to tell him “how profoundly important the book is.”
In a review for The New York Times, Edmond van den Bossche said the novel “contains no prophetic declaration, only a simple warning to mankind.” Now it seems the book may be more prophetic than originally thought.
Current Relevance
Press Secretary Sean Spicer lied to the media, claiming 1.5 million people were in attendance at Donald Trump’s Presidential Inauguration when crowd scientist Keith Still estimated it was really no more than 600,000. On Jan. 22, Counselor to the President Kellyanne Conway argued that Spicer’s statement was not a falsehood, but an example of “alternative facts.”
This sounds a lot like the concept of “doublethink” in “Nineteen Eighty-Four,” the idea that you can hold two contradictory ideas at once.
After Conway’s statement, “Nineteen Eighty-Four” became the top-selling book on Amazon, and publisher Penguin is printing more copies to keep up with demand.
Other parallels include the government’s use of a scapegoat, in this case the scapegoat, Emmanuel Goldstein, whom they blame all of their problems on, much like the Trump administration is blaming all of the nation’s problems on Muslims and undocumented immigrants.
The totalitarian government in “Nineteen Eighty-Four” is also promoted through propaganda and has no free press, which President Trump seems to be aiming for by calling legitimate journalism “fake news” and attacking government agencies that tell the truth about what is happening in the world.
Trump says he should be the only source the American people can trust. This would eventually lead to a single news media outlet, which would produce nothing but propaganda and lies.
https://eastfieldnews.com/2016/12/15/common-book-events-explore-diverse-themes-engage-students/