U.S. leaders should grow up, take control of nation 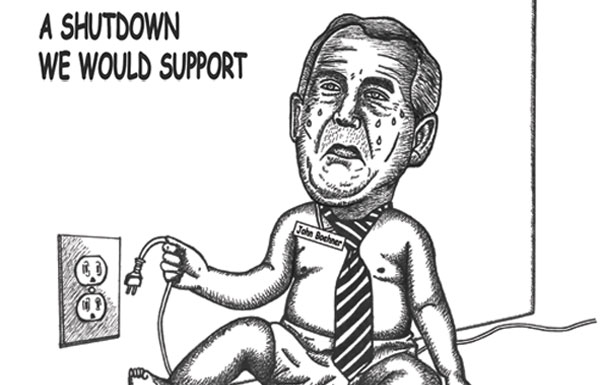 On Oct. 1 — the first day of the 2014 federal fiscal year — the U.S. government entered a partial shutdown after Congress failed to pass a spending bill in an effort to delay the Patient Protection and Affordable Care Act. This resulted in the suspension of a number of services and the furlough of more than 800,000 government workers.
As the shutdown enters its third week, Americans are growing increasingly concerned about its impact on both the U.S. economy and its citizens.
We believe Congress’ act of enabling the shutdown is childish and a major overreaction to not getting their own way.
Major parts of the government were shut down because one faction of Congress protested a law it did not agree with.
To put this behavior in perspective, imagine if college administrators enacted a new rule that did not sit well with the faculty. In response, all professors decided to leave their jobs, placing the education of students campus-wide on indefinite suspension.
In their efforts to protest this new rule and improve the college, the professors would actually harming the students, making it worse for everyone involved.
Faculty members would lose their jobs and sources of income, while students would be losing valuable time that could be spent furthering their education.
Similarly, this shutdown is helping no one.
Almost a million federal workers have temporarily lost a source of income and millions of others no longer have access to vital government services.
As the shutdown continues with no sign of a guaranteed compromise between the opposing factions, its negative impact on the U.S. economy continues to increase.
The Patient Protection and Affordable Care Act, while controversial, legally passed through the legislative process. It was not an executive order.
Congress has no excuse for its actions. Its opposition to the act is directly harming the American people.
It’s time for our lawmakers to stop throwing temper tantrums and start doing their jobs.