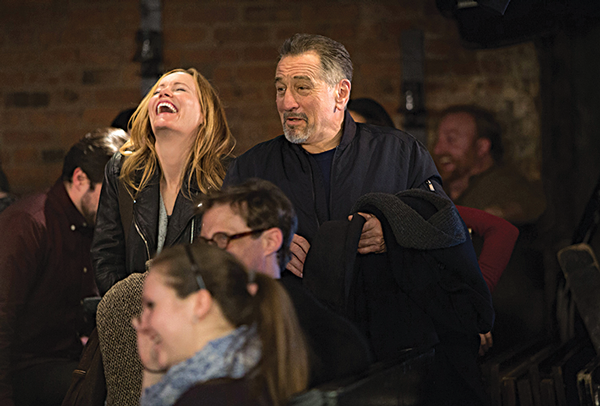 “The Comedian,” starring Robert De Niro, Danny DeVito, Leslie Mann, Harvey Keitel and many other stars of television and film, takes a realistic approach to the classic boy meets girl archetype, shaking off clichés in the often-overdone romantic comedy genre.

The plot is about a comedy icon named Jackie (De Niro) hitting the low end of a successful career. He falls deeper into insecurity after assaulting a heckler during a  performance.

Jackie meets Harmony (Mann) at a volunteer soup kitchen, where he is serving community service and she is in the middle of an argument with her ex.

As the two get to know each other, Harmony gradually realizes that she has to stand up for herself.

From when they meet, the two inspire each another’s different life perspectives.

Jackie is the jerk with a heart. Harmony proves to be a scarred but hardened love interest. DeVito plays the supportive brother on a leash, and Keitel plays the father with natural vanity.

The characters were well played and believable.

As Jackie tries to reshape himself, audiences stop seeing him as the television persona from earlier in his career.

As dramatic as the film sounds, it has its fair share of comedy to lighten the mood.

From start to finish, the script played out the same girl meets guy drama, yet felt different. Harmony was not as traditional as the love interests in most romantic films.

There were many obvious and a couple clever jokes, which covered ethnicity, sexual orientation and especially profanity. Some of the jokes could be considered offensive.

Typically, those kinds of jokes would be taboo, but because of the crude humor, Jackie finds himself in one viral video after another, promoting his career.

Not everything meshed well, however. Some scenes featured different comedians performing with no significance to the plot. More or less, they felt like forced cameos or comic relief.

A couple did interact with Jackie, which brings me to the next factor overused in the film: There would always be someone referencing Jackie’s TV character.

The viral videos stuck out since they proved convincing, looking like something that could have come straight off of 2008 YouTube.

“The Comedian” gives a satisfying experience regardless of the cons. It is an entertaining, well made film.