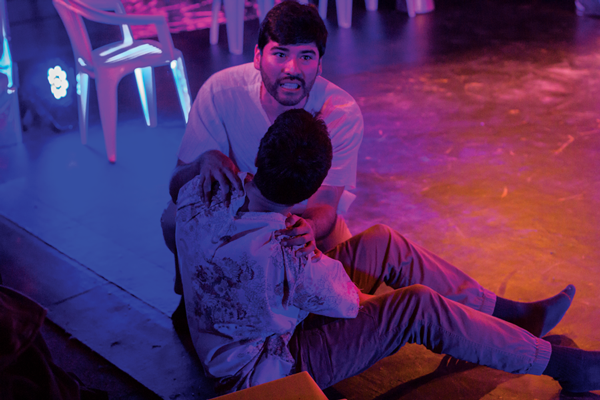 By KATRINA BOND
@KatBondETC
Complete with drones, a grass stage, and unconventional dance, the Danielle Georgiou Dance Group’s production of “War Flower” will explore themes of humanity and survival through media.
“War Flower” was created as a collaborative project between Eastfield dance instructor and company leader, Danielle Georgiou, conceptual artist Justin Lochlear, local musician Donovan Jones, and technical director and Eastfield professor Lori Honeycutt, as well as other members of the dance group.
The show is abstract and ambiguous. “War Flower” will use drone puppets, unique soundscapes, and an unconventional relationship between the performers and the audience.
Georgiou said that the audience can expect there to be no fourth wall during the show, and believes the piece will be interactive even without audience participation.
Georgiou first came up with the idea for the show as an exploration of humanity and its rituals.

“No matter your gender, sexuality, race, ethnicity, where you were raised, what language you speak, we all function in a very similar manner.” Georgiou said. “Humans have behaviors that are inherent within them that no matter where you come from, you do, so we wanted to explore those rituals”
Georgiou began writing the show during the election cycle in 2016, which heavily influenced the piece.
“It was a way to explore miscommunication, missed opportunities to connect and find relationships and common ground,” Georgiou said.
[READ MORE: Common book events explore diverse themes, engage students]
Georgiou is a first generation American. Her parents are immigrants from Greece and South Africa. Her fear of the current political climate, specifically towards people who have immigrated to the United States and their children, is expressed within the show as well.
“War Flower’s” use of language was also impacted by Georgiou’s experiences learning English as a second language.
“A lot of the writing from the show came from me learning English and learning what words mean,” Georgiou said.

The show begins with an onslaught of words, which are eventually deconstructed as the show moves into nonverbal expression.
“In the show, we give you an abundance of media, an abundance of words, an abundance of movement, to where you start to question whether or not it really has meaning,” Lochlear said.
Lochlear said the show will explore a different perspective on humans, and appeal to poets, dancers, artists, and musicians, as well as people who use media daily, and even people from other planets.
“The way they express themselves is very uncomfortable, but very human,” he said.
Eastfield faculty members, such as Georgiou, Honeycutt, and Amanda Preston, as well as former Eastfield students, such as current TWU dance major Colby Calhoun will participate in the show.
Calhoun, age 21, is excited to participating in such a political production.
“This has such a broad scope that seems so specific to what’s happening right now,” Calhoun said. “We’re creating a microcosm of what is to come.”
[READ MORE: ‘Red Pegasus’ is a one-stop shop for endless comics]
Georgiou and Lochlear believe that the show will resonate with each audience member in a unique way.
“Maybe people will find a reflection of an emotion they’ve never been able to crystallize before,” Lochlear said.
The show will run from Jan 19 through Jan 28 at the Bath House Cultural Center. Tickets can be found at www.dgdgdancegroup.com
https://eastfieldnews.com/2016/12/21/photo-story-young-student-finds-balance-between-school-down-time/
Delete Image
Align Left
Align Center
Align Right
Align Left
Align Center
Delete Heading