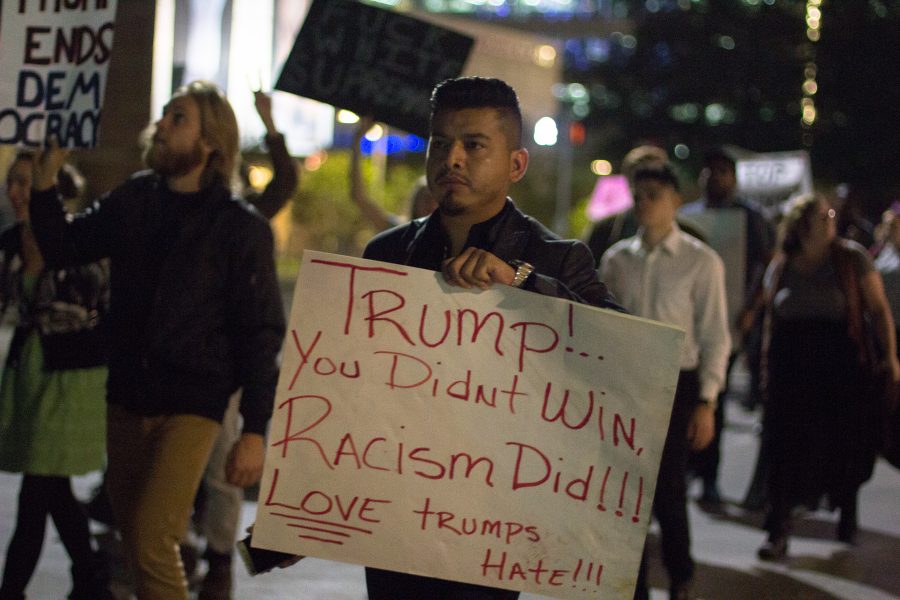 While some protesters were animated and active, others were solemn and reserved. Photo Jonathan Wences/The Et Cetera

Nearly a month after Republican President-elect Donald Trump’s historic upset over former Secretary of State Hillary Clinton, America remains as divided as before the election.

Trump’s policies have softened following his win, but he still vows to take a hardline stance against undocumented immigrants convicted of crimes, close off trade with China and countries involved in NAFTA and eradicate the Affordable Care Act and some of President Obama’s executive orders, such as Deferred Action for Childhood Arrivals and Deferred Action for Parents of Americans.

DACA gives qualifying undocumented immigrants who entered the United States as children the opportunity to work and attend school without fear of deportation. Applicants must file for renewal every two years.

Trump’s victory has caused many people, especially minorities, to fear for their future within the country.

“This presidential election was something fearful and unexpected,” student Maria Serratos said. “I didn’t expect that the candidate Donald Trump could win the election.”

Science major Alma Gallardo said there was a racial element in the election.

“I am not in favor nor against Donald Trump’s presidency because it wasn’t in my hands,” she said. “I feel like racial tension is increasing, and I understand that in all society there is racism. Although I feel that Trump does have a lot to do with the recent racial tension, because before the election racism wasn’t that bad, but again racism right now exists in all parts of the world.”

Protests have sprung up in places like New York, Los Angeles and Dallas. Speech professor Nick Vera believes protesters are expressing their First Amendment rights and should be lauded so long as they are non-violent.

[READ MORE: The High 5: Fake news and how to avoid it]

Conversely, student Joel Bahm said that people should unite as a country and put their differences behind them.

“They are acting like a bunch of babies, and they need to grow up,” he said of the protestors. “They will either have to get along or not. Give the elected president a chance. He’ll either do well or hang himself.”

“We had sort of a bad pick between the candidates,” she said. “Probably neither one of them would have lasted more than four years. So hopefully, we’ll get a better choice next time.”

Student Government Association President Aaron Sustaita said it is their right to protest, but their actions could have negative consequences.

“I don’t want to say that I support them,” he said. “I do support the fact that they are

voicing their opinion, and they have the right to do that. … This is how our government works.”

“We have to have activists,” he said. “Otherwise, we have people just sitting down, and every four years they pull a lever for someone, and they think that that’s democracy. I think the reaction has been misinformed, and it’s because we’re so used to sitting still and waiting to be called on.”

“People [need to] get more involved,” Holmes said. “I believe if people are participating more with the process of government, that things could change.”

Holmes stated that he believed about 43 percent of eligible voters didn’t vote, which is an accurate tally.

Turnout for this year’s election 57 percent of eligible voters with 48.2 percent of the popular vote going to Clinton and 46.4 percent to Trump, according the FiveThirtyEight and The Cook Political Report, respectively.

Many have worried that with a Republican-controlled House of Representatives, Senate, and White House, many programs implemented in President Obama’s presidency, such as DACA, will be revoked.

Sustaita, a DACA student, believes that revoking the program will only harm the educational society.

“I do have a feeling that it is going to change, but I do know that it won’t be repealed,” he said. “It’s probably going to be more restrictive because Republicans and Democrats don’t really mix.”

Vera believes it isn’t specific groups that need to be focus on, but the overall school system and other publicly funded institutions across the country.

“I would look at how will publicly funded winstitutions be affected by this election,” he said. “I would look at the larger umbrella there. How is it going to affect publicly funded institutions like museums, hospitals, roads and schools? Then we can drill down from there to see how it will affect individuals. Institutionally, I think it’s going to affect people negatively if you privatize what was previously public.”

Criminal Justice major Victor Dias wasn’t in favor of some of Trump’s policies, like the building of the wall, but disagreed with how the media represented him.

“I hate how the media portrayed Trump as if everything were wrong with him,” he said. “It never failed. I would log on to my Facebook and see anti-Trump campaign videos on my feed but never an anti-Clinton video. I felt like I was the only pro-Trump supporter amongst my friends and family, so when he won I had bad looks.”

English major David Ndombe believes Trump won the presidency because he connected with the American people.

“If he can bring back American jobs and lower the taxes for companies, America will be [better off],” he said. “America isn’t in bad shape, but it does need to be improved.”

Gallardo reiterates this as well.

“Trump could be a good leader because of the fact that he was … being 100 percent honest,” she said. “That definitely is something to be optimistic about.”

Holmes believes that this election can lead to benefits for the future.

“Let people have their choice,” he said. “This is what this country is built on: choice. I believe that there should be a general goal that we should all aspire to, but it’s individualism and diversity that makes this country great.”

Check out these audio interviews from The Et Cetera: