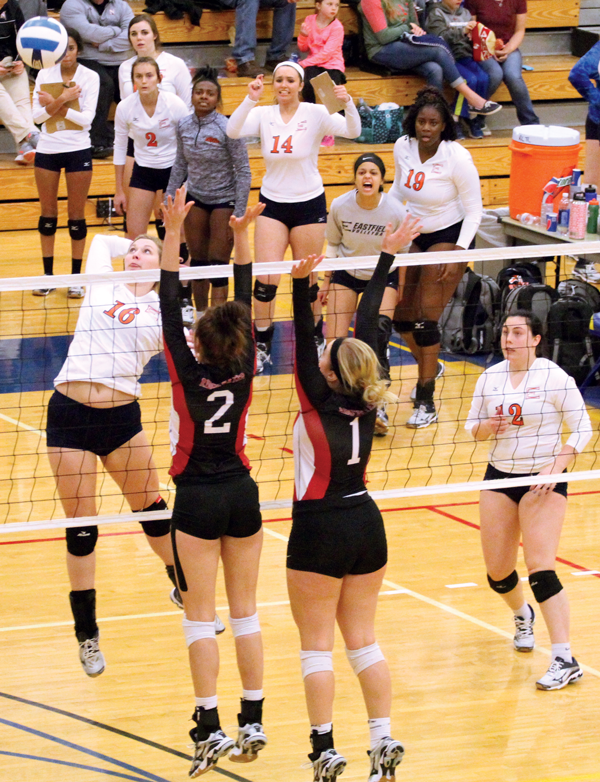 Payton Costlow goes up for a kill against Ridgewater on Nov. 11. Costlow was named to the All-tournament team.

“I can’t believe I’m a part of something like this,” outside hitter Sammie Thoma said. “This team has really overcome some pretty big obstacles, but we did some incredible things. I think it is amazing that we played the way we did.”

Outside hitter Kerstin Fredrickson and middle blocker Payton Costlow were named to the All-tournament Team.

The Harvesters finished their season with a 26-5 overall record and 11-0 in conference.

Eastfield played without libero Karina Lay, who injured her knee in the first set of the quarterfinal game against North Hampton.

Freshman Alyssa Tomlin filled in for Lay.
It was the first time Tomlin had ever played libero in a game.

“I think she did a great job being that she hasn’t practiced it all year,” Crisp said. “She has always been our outside hitter. I looked at her at one point on the sideline and told her to take a breath because you could tell she was excited.”

Lay went from a leader on the court to an eye on the bench as she cheered the team on.

“I felt like I could help the team by telling them what was open,’’ Lay said. “I also thought me being loud on the bench would be good because I was loud on the court as well, so having that same voice on and off the court would be good for the team.”

The Harvesters ran the first two games but struggled in the third.

Setter Zelda Ortiz led the team through the final game as a voice of encouragement on the court.

“Dig deep, believe in yourself,” she would tell the team.

The close play at the end forced the Harvesters to score an additional two points to win the game and match.

The Harvesters opened the tournament against North Hampton, winning in straight games (25-13, 25-15, 24-14) and snapping
their opponent’s 23-game winning streak.

Eastfield lost that game 10-15, missing a chance at the championship and sending them to the third-pace match.

“I’m proud of them and how hard they fought,” Crisp said. “I was seeing what I could do to get the girls back in it so that we didn’t get derailed. I told them to pass and to play their game.”

The team was in shock after losing.

“It wasn’t believable at first,” Costlow said. “We all thought we were going to get [to the national championship game], and then all of our dreams were crushed. I know it sounds dramatic, but they were in that moment. We were pretty evenly matched teams. We left it all out there, and there was nothing more we could have done.”