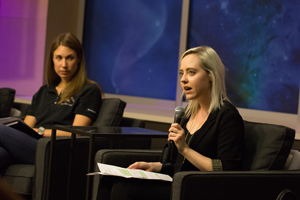 Editor’s note: This story placed third in the Texas Community College Journalism Association’s annual live competition.
By DAVID SILVA
@DavidSilvaETC
HOUSTON—Experts in NASA’s Journey to Mars program reaffirmed President Barack Obama’s goal to send humans to Mars by 2030 during an Oct. 14 panel discussion in the Johnson Space Center.
In a recent op-ed article, the president said his administration has “revitalized technology and innovation at NASA” and praised how the program discovered flowing water on Mars in 2015, mapped out Pluto in April and found evidence of ice movement on one of Jupiter’s moons just last month.
The panel included NASA public affairs specialist Hailey Fick, Exploration Integration and Science Directorate member Michelle Rucker and Mars research scientist Elizabeth Rampe.
President Obama also reasserted the importance of NASA’s mission to send humans to Mars, a mission that is in its early stages.
“We’ve had continuous human presence at the space station for almost 16 years,” Fick said.
She said the program is currently in the first step, called “Earth Reliant,” of its planned three-step program.
Earth Reliant focuses on astronauts training at the International Space Program and mastering low-orbit trips.
Ruckers said that there are still various scenarios and logistics that impede the astronauts from traveling to Mars and returning safely, including the size of the space shuttle.
“The first challenge is getting something that big to the surface [of Mars],” Rucker said. “The next challenge is once we’ve landed. Mars is really far away, so the communication lag time between here and Mars could be up to 45 minutes.”
Rucker said the delay of communication would leave astronauts relatively isolated and brought up other problems including the effect of space on the human body, the possibility of dust storms on Mars and the need for the astronauts to create and grow their own supplies.
[READ MORE: Buck helps students overcome insecurities]
“Trying to take all of the needed supplies to Mars is going to be impractical,” Ruckers said. “So one of the things we’re looking at doing is [using] what we have on Mars, like chemicals we think we can use to make oxygen from.”
The process of making chemicals useable for human consumption is something out of the scientists’ present reach.
“We’re gonna be there for a month or two, or up to 500 days,” she said. “That requires a lot of new technology that we haven’t perfected.”
Despite the risks, Rampe stressed the importance of exploring the red planet.
“We see ancient river and stream deposits,” Rampe said. “We see lake deposits and impact craters. The ultimate question we want to answer as scientists is: ‘Was there ever life on Mars?’
President Obama echoed that question in his op-ed and said that human exploration going beyond our planet’s orbit will “make our lives better here on Earth.”
Fick closed the panel by mirroring the praise President Obama had for the NASA program.
The ambitiousness of the mission to Mars, she said, will lead to great scientific, philosophical and personal discoveries but will require time, research and technological advances.
“I think all of you and people younger will be the people that are maybe going to Mars one day,” she said. “We really are paving the way to students that are in classrooms right now.”
[READ NEXT: Panel discusses free speech, election coverage]
Delete Image
Align Left
Align Center
Align Right
Align Left
Align Center
Delete Heading