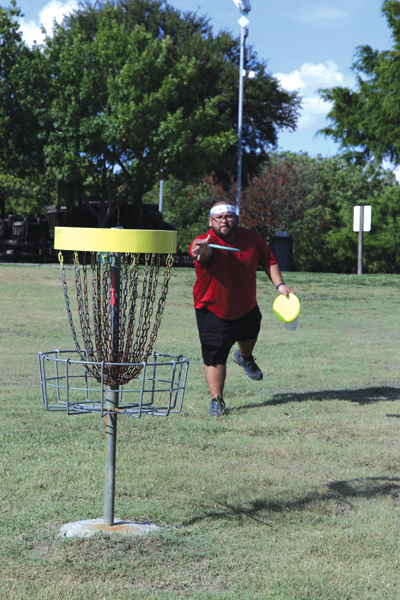 By BRIANNA HARMON
Managing Editor
@BHarmonETC
Conditions are not ideal. The wind is blowing so hard that the disc flies off the track once it’s thrown. But the moment you hear the chains cling as the disc flies through them into the hole is the most satisfying feeling, said Upward Bound’s Jonathan Estrada.
Disc golf is just like regular golf, but instead of using a ball and clubs, players use a flying disc or a Frisbee. Ed Headrick created the sport in the 1976.
The goal of disc golf is to start at the tee and throw the disc to the hole. The hole isn’t like ball golf’s hole; it is a metal basket with chains on it. The scoring is the same as regular golf. The course has a certain amount of throws to complete the hole. A stroke is counted every time the disc is thrown toward the hole.
“I have been playing for eight years, and this past two years, disc golf has had an astronomical growth,”
Estrada said. “Some of the courses you used to go to, there would be no one there. Now you go and there is a little bit of a wait to play.”
The Board of Trustees has
approved a disc golf course for the main Eastfield campus. Facilities are considering possibilities for where to put the course. The popular opinion is to place the course around the entire campus.
“We want the course to be
enjoyable and have some degree of difficulty,” Director of Facilities
Michael Brantley said. “We would like to look at the entire outskirting campus.”
Brantley is still in the early stages of creating the disc golf course. He will hire a specialized contractor to design the course and decide where it will be placed.
“Potentially, the course could be ready as early as next November,” Brantley said. “That is all contingent on if we have all the resources in place and the design is approved.”
Brantley wants the course to get students and members of the
community more involved on
campus.
“We want to continue to have students and the campus community enjoy all of our athletic fields,” he said. “Adding disc golf will give them another way of enjoying the campus while they are here.”
[READ MORE: Don’t go breaking our hearts: Five times Rangers blew it]
Estrada loves to share the game with his students. He took early college high school student Leo
Hernandez to a local park to teach him how to play.
Hernandez had never played the sport before.
“It looks easy, but it really isn’t,” Hernandez said. “It’s a very difficult sport to play. Disc golf is not about strength. It’s about technique.”
Estrada has played the sport
individually and on a team and has even won tournaments. He said he has competition in his blood from
growing up playing a variety of sports including football and soccer.
“Competing on a team in disc golf is different because it is primarily an individual sport,” he said. “But
coming from a team sports background, it feels at home. I enjoy
playing alongside my friends.”
Estrada said that the coolest place he has played disc golf at was AT&T Stadium. Dynamic Disc, a disc golf company, hosted an event inside AT&T Stadium.
Holes were placed throughout the tunnels and in the stands, and the last hole forced
players to throw from the top of the stadium seats to the star in the middle of the field.
[READ MORE: Athlete clings to soccer after tragedy]
Throwing discs in a park has been Estrada’s way of escaping from reality, but that was recently taken from him.
Earlier this year, Estrada was in a car accident that left him
unable to walk for two weeks. Once he
regained use of his legs, it caused him tremendous pain.
He ended up not being able to play for four months after the accident. The thought of being back on a course playing the game he loved is what kept him motivated.
“For me, disc golf is freedom,” he said. “I just wanted to be outside and out of pain. It was the idea of playing again and being back on the course that helped keep me focused and not get depressed.”
Delete Image
Align Left
Align Center
Align Right
Align Left
Align Center
Delete Heading