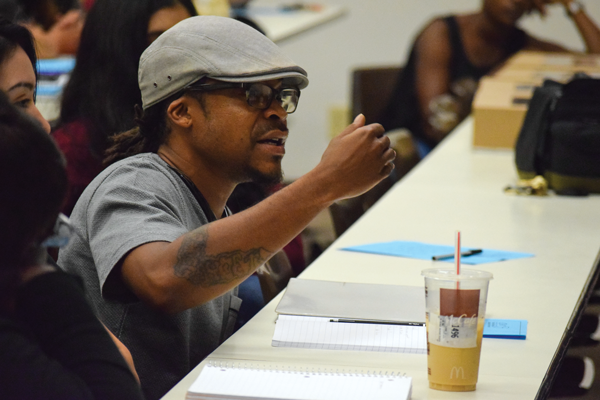 By J. GOMEZ
@TheEtCetera
Despite a court order overturning Texas’ controversial voter ID law, the issue remains in the forefront of the 2016 presidential election.
A judge last week ordered the state to reprint voter education materials because they misled potential voters regarding their ability to cast ballots without photo ID. Days later, the Texas attorney general asked the Supreme Court to reinstate the photo ID requirement.
Supporters of such laws argue that they prevent voter fraud. Opponents say they are designed to suppress minority voter turnout.
Faculty members debated the value of the law during a Sept. 16 panel discussion, one of a series of events this fall aimed at increasing voter participation among students.
[READ MORE: Police test emergency response in lockdown drill]
“Blocking people’s right to vote on the pretense of rampant spread voter ID fraud – it’s just false, it’s not even true,” history professor Kat Reguero said.
This summer, an appeals court struck down North Carolina’s voter ID law, saying legislators enacted it with “racially discriminatory intent.”
But courts don’t have to find evidence of bias by lawmakers to rule a voter ID law illegal. Under the Voting Rights Act, laws are illegitimate if they erect substantial roadblocks to voting.
“As a matter of law, it may be completely irrelevant trying to read their mind because the effect becomes what the effect is, regardless of what they intended,” government professor Cindy Castaneda said.
Reguero said that voter ID laws, regardless of their intent, tend to harm minority groups.
“What happens is that it tends to target groups, African-Americans specifically, people that are economically disadvantaged, and the elderly,” she said.
This means groups that traditionally don’t vote turn out in even fewer numbers.
“The problem with a lack of participation in voting pre-existed the voter ID law in Texas,” Reguero said. “It is a problem that is systemic. The voter ID law did not help, but it is not the cause of our lack of participation, and it possibly made it worse.”
History professor Mike Noble warned the crowd to be careful what they wished for concerning increased voter turnout.
“Absolutely we need more participation,” he said. “But what you also have to remember is the more democracy you have, the more idiots you have.”
[READ MORE: Class policies may prevent student involvement]
Only 21.5 percent of Texas’ eligible voters cast ballots in the presidential primaries in March, the second-worst turnout in the country. About 43 percent participated in the 2012 presidential election, one of the worst rates in the country, according to the secretary of state.
For the Nov. 8 election, voters will be asked for photo ID. Acceptable forms are a driver’s license, handgun license issued by the Texas Department of Public Safety, an election ID certificate or personal ID card issued by DPS, a military ID, a citizenship certificate or a passport.
Voters facing a “reasonable impediment” to getting one of these types of IDs may cast ballots by showing an official document with their name and address, such as a paycheck or electric bill.
The Supreme Court will not make a ruling on the state’s appeal until after the election. The deadline to register to vote in the presidential election is Oct. 11.
“If you’re upset with the way things are, by God, get out and do something,” Noble said. “Go vote.”
Delete Image
Align Left
Align Center
Align Right
Align Left
Align Center
Delete Heading