Rolling in ecstasy: As rave culture re-emerges, so does ecstasy 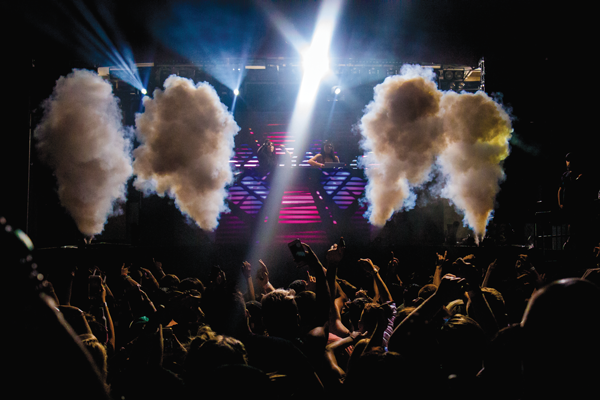 The bad Krewella performs at a rave in Dallas earlier this month. David Sanchez/The Et Cetera


By DAVID SILVA
@DavidSilvaETC
Editor’s Note: Some names have been changed to protect the identities of those involved.
Jeremy goes through the same routine every time. As he sits in his car and prepares to enter the concert hall, he runs through his checklist of essential items.
Tickets? Check.
Cash? Check.
ID? Check.
Next, he pulls out a pair of mirrored sunglasses, a pack of mint gum and a little bag containing an orange pill. Check, check, check.
He takes the pill out of the bag, splits it in two and swallows half without hesitation.
“Security pats you down,” he said. “So I take it now.”

After he gets through security and enters the venue, the bass begins to vibrate under his feet. The DJ’s platform is at the end of the hall, surrounded by large screens and an assortment of lights that follow the beat of the music. Everyone is standing around, talking to one another while more people come in.

Jeremy buys a bottle of water. Check.
Jeremy is a 20-year-old Eastfield student. He’s going to school, working part-time and has become an avid fan of electronic dance music concerts and festivals, commonly called raves, in the last year or so.
He’s one of many young Americans immersed in the “new rave generation.”
As EDM dominates the pop charts, radio waves and music festivals, more and more millennials are flocking to see their favorite DJs at raves.
Jeremy is also one of many rising consumers of mood- and perception-altering MDMA, or ecstasy. The love for EDM and rave counterculture has brought the use of ecstasy and Molly, slang for MDMA pills mixed with other chemicals, to a mainstream audience. This has set the stage for an increasing supply of highly potent ecstasy, something that has law enforcement concerned.
“I think I’ve gone to about seven or eight [raves],” Jeremy said. “Some really big festivals, and then some like [tonight].”
After about an hour, the energy in the room begins to change. As more people pack the open floor, they start to dance, jump and sway. Jeremy pops a piece of gum in his mouth and puts on his glasses.
“[The gum] keeps your teeth from chattering,” he said. “The glasses are for when your eyes wiggle.”
[READ MORE: Employees get a raise, tuition does not]
Soon after, more and more people put on glasses or begin to dance with their eyes closed. Others move to the music with their eyes rolling back.
The room’s humidity rises, and several people bump into one another on the packed dance floor. Jeremy finds a dance partner. He’s not bothered when someone suddenly shoves him.
The limited elbowroom only concerns the few sober faces in the crowd. Everyone else seems completely blissful with the company they’re in.
In this sea of people, many find it pleasing to find this form of escape. The interaction among “rolling” individuals appears genuinely and overwhelmingly warm. Then the beat builds, the bass drops and everyone jumps up with their hands in the air. To some, the experience is almost spiritual.
“I started going because it seemed like fun,” Jeremy said. “When you’re there, everyone’s happy. It’s like a big family.”

In the early 1980s, the introduction of ecstasy and the rising experimentation with synthesizers collided to create Chicago house and techno music, genres explicitly created to enhance the high of ecstasy, according to Tim Pilcher’s book “E, the Incredibly Strange History of Ecstasy.” From the increasing popularity of acid house music parties, a new rave counterculture emerged and spread to New York, Dallas and Europe.
These electronic house parties, along with ecstasy usage, became so popular in the United Kingdom that the summer of 1988 was labeled the “Second Summer of Love.”  The members of these intricately lit, bass-boosted communions drew parallels among the hippy ideals of unity and escape.
“You don’t ever have a bad trip,” Jeremy said. “Everyone [is] on it, so we’re all together, just vibing.”
Acid house parties peaked in the U.S. in the 1990s. However, deaths related to mixed MDMA, a decrease in quality of the drug and the crackdown of parties by law enforcement subdued ecstasy use.
Despite the decline of the nightclub scene, EDM continued to rise in popularity in the U.S. during the 2000s and soon displaced hip-hop as the template for pop music. Seven of the top 10 Billboard songs in 2005 were hip-hop songs. By 2009, more than half of the most successful songs were EDM tracks.
In 2011, EDM disc jockeys such as Deadmau5, David Guetta and Avicii introduced the contemporary form of EDM. Soon, pop musicians and rappers began to include EDM elements in their music. That year also saw the birth of huge EDM festivals, and thus the birth of the new rave generation.
According to a Nielsen report, there were more than 30 million annual attendees at U.S. music festivals by 2014 with nearly 15 million millennial attendees.
[READ MORE: Panel addresses police-community relations]
“Everybody uses the generalization that you can’t have a bad trip,”  counseling professor Daniel Ramirez said. “I understand the hype, but that’s a misconception.”
Ramirez referred to his experience in college, when friends would take ecstasy and be left in dangerous positions.
“I’ve had many friends in college who had a bad trip,” he said. “Later we found out there was a bad batch going around.”
A year after he entered the rave scene, Jeremy has taken ecstasy at every rave he’s attended.  He said the stuff he took for the rave is the “real deal,” not weak or altered pills.
The massive popularity of EDM has set the stage for a new age of MDMA consumption, and drug producers are taking advantage of it.
A 2016 report by the European Monitoring Centre for Drugs and Drug Addiction has cited a recent resurgence in popularity for the drug, noting that suppliers are meeting the demand with a much more potent product.
This new supply is being pushed out in an attempt to “improve perception of the drug after a lengthy period in which poor drug quality and adulteration had resulted in a decline in use,” the report said. Suppliers are also utilizing gimmick designs to increase their popularity, such as glow in the dark pills and UPS logos.
What Jeremy took is called an Orange Tesla, a new high-dosage pill with the Tesla company design.

According to the National Institute of Drug Abuse, ecstasy pills contained up to 80 mg of MDMA per pill during the early 2000s. The Orange Tesla contains 240 mg of MDMA, producing feelings of “increased energy, pleasure, emotional warmth and distorted sensory and time perception” by increasing dopamine, serotonin and norepinephrine levels. The drug also affects mood, trust and sexual arousal.
Jeremy said it is important to only take sips of water while rolling, since overhydrating your body without replenishing sodium or electrolytes can result in a hospital visit.
Health effects of ecstasy include increased heart rate and blood pressure and negative effects on the body’s ability to regulate temperature.
[READ MORE: Class policies may prevent student involvement]
“There’s an invincibility aspect of it,” Ramirez said. “But if it’s stronger and made with different product, you don’t know what the adverse effects are going to be.”
Jeremy took half of the pill and left the rest in his car.
“I would be worried if I took more than half,” he said. “I’d rather just be chill.”
The venues in Dallas that host raves have tried to regulate the use of ecstasy at events.
A security officer for the event that Jeremy attended said that his team tries to keep each venue safe.
“We have to deal with some people that are on all types of stuff,” he said. “But I make sure to not allow anything in.”
The night was a marathon run, with Jeremy entering the concert hall at 10 p.m. and the dancing continuing well past 2 a.m.
By midnight, the place goes completely dark, and the crowd starts to scream. They wait in anticipation for the headliner of the show. Through smoke and darkness and the murmuring crowd, the DJ positions himself behind the turntables. The room is rumbling. The crowd has reached a unified pleasure. When the first chord fills the air, they sing along to every word.
The beat builds, and the room climbs up with it. As Jeremy prepares for the drop, there’s a moment when his face shows a heightened relationship with the crowd, where those around him bond together like long-time friends. His trance, caused by the dancing, the music and the little orange pill, seems to create a sense of belonging in his raver community.
“How often can you say you’re a part of something like this?” Jeremy said as he left the venue, a big smile on his face and sweat covering his shirt. “It’s not going to last [forever], but right now, it’s our thing.”
[READ NEXT: Late El Centro intruder alerts spur concerns]
Correction: In a previous version of this article, Dr. Douglas Rushkoff was named as the writer of “E, The Incredibly Strange History of Ecstasy.” Tim Pilcher is the actual author of the book. The Et Cetera regrets this error.
Click any photo to view a slide show: