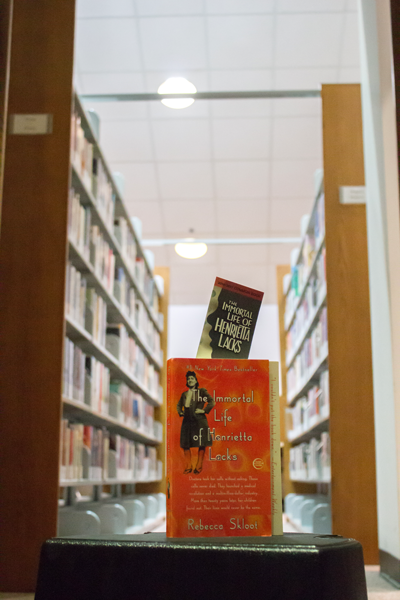 Rebecca Skloot’s debut nonfiction book, “The Immortal Life of Henrietta Lacks,” is this year’s common book, a literary work integrated into classes and activities throughout the academic year.

The common book experience is designed to encourage the college community to share a book by reading it, studying it and participating in activities connected to it.

Faculty will use the book in their classes, including English, journalism and science.

Events such as speakers, discussions and an art show will reinforce the book’s message.

Members of the Lacks family will speak on campus Sept. 27, and Dr. Fred Grinnell of UT Southwestern Medical Center will visit campus in October to discuss ethics and human research.

Skloot is the founder and president of the Henrietta Lacks Foundation and an award-winning scientific writer who has been published in media outlets including The New York Times Magazine and O, The Oprah Magazine. She is the co-editor of “The Best American Science Writing 2011” and has worked as a correspondent for PBS’s Nova ScienceNOW.

“The Immortal Life of Henrietta Lacks” took more than a decade to research and write and spent 75 weeks on The New York Times Best Sellers list. Skloot has a Bachelor of Science in biological sciences from Colorado State University and a Master of Fine Arts in creative nonfiction from the University of Pittsburgh.

“The Immortal Life of Henrietta Lacks” tells of the discovery of an astonishing new type of cell found in the cervical cancer cells of poor black tobacco farmer Henrietta Lacks in 1951. The cells sold for a high price and were vital in developing the polio vaccine, cloning, gene mapping and much more.

However, no one told Lacks or her family before or after she succumbed to the cancer in the same year. The book also covers the relationships among members of the Lacks family and racial struggles of the time period.

The book has received widespread acclaim. “Science writing is often just about ‘the facts.’ Skloot’s book, her first, is far deeper, braver, and more wonderful,” The New York Times said. The Dallas Morning News wrote: “The Immortal Life of Henrietta Lacks does more than one book ought to be able to do.”

The book is being translated into more than 25 languages and was chosen as a best book of 2010 by more than 60 media outlets. It won awards including the Chicago Tribune Heartland Prize for Nonfiction and the National Academies of Science Best Book of the Year award.

“The Immortal Life of Henrietta Lacks” can be a little jarring and jumpy at times because of the many different intertwining events.

I think it’s unfortunate that the most interesting parts are about the Lacks family and not the scientific aspect since the book is about how something so damaging can not only change a person, but also a generation of people.

Still, the book even with it faults falls nothing short of genius; Skloot brilliantly adds a guide in her book and includes pictures to help when reading, especially if you’re not the type of reader who can read a book and picture the action in your head.

Each chapter is engaging and full of interesting anecdotes and some weird interfamily relationships. This is fantastic literature. It is well worth a read.