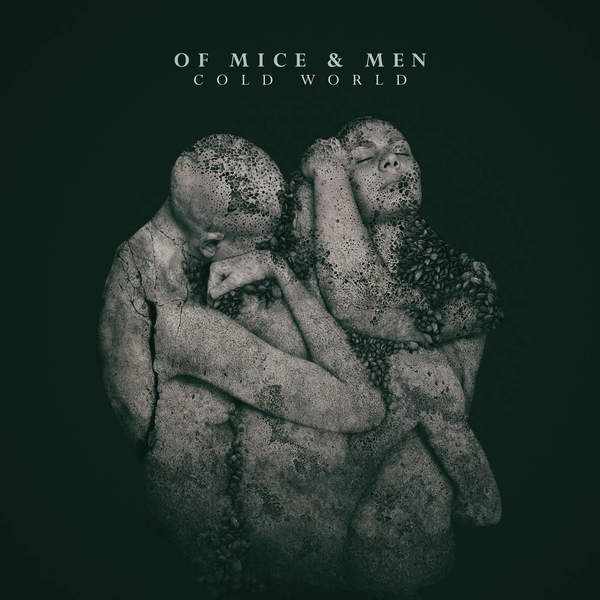 
California post-hardcore quintet Of Mice & Men, one of the most culturally influential bands in the scene today, pushes their angsty, progressive sound to the next level in their latest album “Cold World.”
While other bands would find it near-impossible to follow up on emotionally charged, hard-driving songs from a previous album like “Never Giving Up,” “Broken Generation” and “Space Enough to Grow,” OM&M makes it look effortless.
“Cold World” takes a step away from their heavy-for-the-sake-of-heavy sound by diversifying their style throughout the album changing time signatures and tone within individual tracks.
The 2000s metalcore-punk mix has mostly dissipated, the sound evolving with the depth of OM&M’s message. The result is a slightly more grungy tone that maintains the punkish, melodic essence that has made the band so recognizable.
The messages in each song seem more personal, as they have in each consecutive OM&M album.
“Like a Ghost” blends melodic rhythm, individual sound profiles and vocalist Austin Carlile’s jarring, guttural screams to orchestral perfection.
[READ MORE: Despite glossy look, ‘Resident Evil 4’ rerelease pointless]
Smooth transitions between clean vocalist Aaron Pauley’s hope-inducing voice and Carlile’s brutal screams seem to illustrate an internal battle against mental illnesses like depression and anxiety.
The instrumental elements perfectly complement the dominant vocal force, be it Pauley or Carlile, and reflect the emotional and mental messages presented.
The largest departure from the band’s traditional sound is in “Relentless,” which takes on a rapcore sound through the verses.
Lyrically, the album largely sticks to the theme of overcoming personal struggles and trials as typically associated with OM&M. The first two songs on the album present the most obvious addressing of social issues.
“Game of War” reflects on the monstrosities committed by terrorists in San Bernardino, California, through its haunting, solemn tone.
“The Lie,” which tackles the larger issue of those who cause seemingly endless conflict, and “Game of War” enrich each other in message and contradict each other in sound and style. Together, the two illustrate the mourning over the lives lost to terrorism (“Game of War”) and outrage over senseless violence (“The Lie”) without becoming overly political or self-righteous.
Lyrics shift from a socially directed message to a more personal one after the first two tracks. “Real” and “Contagious” address betrayal and attacks from those who are most trusted.
[READ MORE: Five must-have apps that will help you make it through college]
The tail end of the album tells of Carlile’s personal journey including health struggles and questions about purpose and life.
“Pain” remarks on the Carlile’s fight against Marfan Syndrome, a disorder that affects connective body tissue, and the temptation to give up because of the agony it causes.
“Down the Road” takes a look at the lyricist’s faith, a topic not commonly addressed in the band’s lyrics but riddled with question ever since the vocalist’s departure from his former band, Attack! Attack!
“Away” and “Transfigured” create an almost hopeful end to the album. At the same time, Carlile accepts that struggles won’t end, understanding that they are just a part of life. “Transfigured” represents a renewal in the band’s dedication to fight through hard times and encourage listeners to grow and become stronger.
The album offers OM&M’s best music yet. “Cold World” is brutally honest and takes the band’s style to a darker, more real place.
[READ NEXT: Wilder’s classic Wonka showcases legend’s talent]