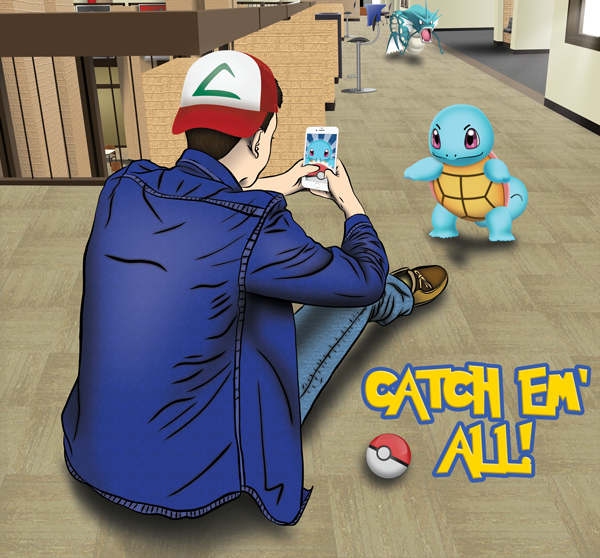 The “Pokemon Go” craze has come to Eastfield College, and with four Pokestops and one full-fledged Pokemon gym on campus, you don’t have to go far to “catch ‘em all.”

The latest in the “Pokemon” video game series, “Pokemon Go” is a free-to-play phone app that encourages users to explore their surroundings in search of collectible monsters to catch and train.

Players can enter team-based battles in virtual gyms and visit Pokestops to heal their Pokemon and replenish their supplies while interacting with other players in the real world.

“Pokemon Go” has become a cultural phenomenon. About 15 million people downloaded the app within the first week.

In Taiwan, thousands of people sprinted through the streets to catch a Snorlax.

Players have stumbled across dead bodies in overgrown areas, been robbed by thieves using the game to lure victims and been arrested for trespassing.

National historic sites, cemeteries and museums have requested that visitors refrain from hunting Pokemon on their grounds.

Catching a Pokemon is as simple as throwing a Pokeball on your phone screen, but you must visit a Pokestop once you run out of Pokeballs if you don’t want to pay for them with real-world currency. Pokestops are landmarkers where you can collect Pokeballs, potions, eggs and revives.

Eggs can be caught and incubated as you physically walk around in the real world. Once you walk a specific distance, a random Pokemon will hatch from the egg.

Eastfield has four Pokestops on campus: the windmill in front of T building, the soccer fields, the Motley cemetery and the Dr. Mark W. Presley Memorial in front of S building.

There is also a gym on campus located near a permanent art piece in the upper courtyard called “Solar Magnet No. 29,” which the game identifies as “Balls in balls art.”

Digital Media Program Coordinator Dave Danforth said he isn’t worried that the game will be a problem in the classroom.

“’Honestly, there is nothing around, so there won’t be a distraction in class,” he said. “I also think it is a good thing to help students explore the campus.”

In Danforth’s experience, Eastfield is a “desert” when it comes to Pokemon.

“I don’t find a lot of cool things on campus,” he said. “You really have to wander around. I think we should request more stops and then campus would be more fun to play on.”

Early college student Danielle Trejo said she caught more than 40 Pokemon in one day on campus, most of them being common species such as Pidgey, Rattata and Spearow.

“I really want to catch an Eevee,” she said as one appeared on her screen. “I also caught an Abra, which is set to be really hard to catch, but I caught it and it didn’t even run away.”

Undecided major Carina Salcedo said it seems that S building, where she caught a Pikachu, is the best place to catch them. She also has caught multiple Meowths above the Pit.

“It’s fun to go exploring,” Salcedo said. “We [Salcedo and friends] try to find out who can find the Pokemon we are looking for first. It’s kind of like a little competition.”