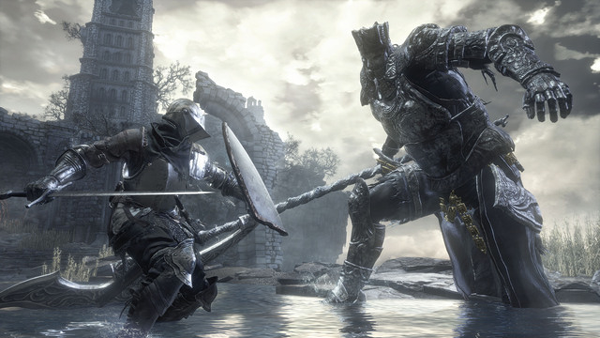 By Caitlin Piper
The infamous difficulty curve of the “Souls” series isn’t so much a sharp incline as it is a Sisyphean trek up the mountains of the Underworld. Just when I think I’ve gotten used to the weight of that boulder and manage to reach the peak, it slips from my hands and goes tumbling back to the ground as a shambling corpse with less muscle mass than a fossilized gnat somehow manages to punt my fully armored player character after it, forcing me to start all over again.
For reasons I’m sure are unrelated, I get some pretty strange looks when I tell people they’re some of my favorite games to come out in the last decade.
“Dark Souls III” is the sort of sequel I find nearly impossible to review on its own merits because it has almost none.
It shamelessly banks on the nostalgia of fans with familiar locations and characters and has gameplay so identical that it left me feeling like a patient at a dark fantasy-themed amnesia clinic.
And yet, as I write this, I have more than 40 hours logged on my main save file and don’t plan to shelve it any time soon.
As per usual, you play as a cursed undead dragged up from your sorry existence to ostensibly return peace to a desolate kingdom centuries past its expiration date. One of my favorite things about the “Souls” series is the richness of its lore and its ability to tell so much with so little, and “Dark Souls III” doesn’t disappoint in either regard.
This isn’t yet another Tolkien clone. The plot is unveiled through the world itself with minimal NPC interaction and cutscenes. Crumbling castles and haunted hamlets tell the story of a world where all the old heroes are dead, broken or indiscriminately homicidal, and unlike most games that emphasize exploration, “Dark Souls III” doesn’t try to hide it all behind pretty skyboxes and invisible walls.
In true “Souls” fashion, if you see something in the distance, you’re going to be able to explore it with virtually no interruptions from loading screens.
The world feels massive and lavishly detailed, yet efficiently designed, and half the fun of exploring is discovering shortcuts to dart through when you inevitably stumble upon one of several hidden bosses.
While on the subject of bosses, “Dark Souls III” has some of the best in the series. After the disappointment of “Dark Souls II” and its many iterations of animated suits of armor, I was dreading the sight of the first boss — a plate-armored knight pinned in place by a rusting long sword — only to be pleasantly surprised when I initiated the fight by ripping the sword from his chest and was promptly sent cartwheeling headfirst into a gravestone by the John Carpenter’s “The Thing”-esque abomination that burst from the wound.
While I won’t spoil my favorite fight, there’s a lot of creativity in the monster designs that I haven’t seen since the first “Souls” game, and oh, how I’ve missed it.
Combat is identical to previous entries in the series, unabashedly so, but it feels more polished and fast-paced due to a few small but noteworthy tweaks. The staples of a “Souls” game are all here. As an undead, you don’t die permanently. Rather, you are sent to the last bonfire you rested at — each of which serve as save points, warp stations and more — at the cost of souls you collect from enemies. These souls serve as both currency and experience points that can be permanently lost if you die before you’re able to reclaim them at the last spot you were defeated. Enemies also respawn with every death and bonfire visit, so tread carefully and guard often.
Your character moves slightly faster than in previous games, though your jump is still pathetically short, and the new ability to move while healing feels like a natural extension of combat. Targeting doesn’t snap away from enemies as much as it did before, and kicks are finally back after a noticeable absence in “Dark Souls II.” There are now multiple types of healing Estus flasks, and while I personally didn’t find the arts system to be all that useful with its options to magically alter weapons, I didn’t find it distracting either.
The difficulty level is pleasantly challenging. It manages to find a happy medium between the overly forgiving “Dark Souls II” — a game that dedicated half an hour to a combat tutorial — and the less-than-welcoming intro to the original — a game that dropped a boss on you while you were still trying to figure out which button made you sprint and which button made you somersault into the nearest chasm. (Protip: They were actually the same.)
“Dark Souls” and its ilk are like that overbearing relative who’s constantly pushing for you to climb to the top of the corporate ladder before you’re old enough to legally fall into the crippling alcoholism that follows.
They want you to succeed, but they’ll leave it to you to figure out who’s there to help and who’s there to sabotage as you’re forced to work with the twin terrors trial and error is order to advance.
And I don’t think I’d have it any other way.
Between the hauntingly crafted world, the rich atmosphere and the indescribable satisfaction of finally figuring out how to beat that thrice-cursed giant who’s kicked you through a cathedral ceiling half a hundred times, “Dark Souls III” is a worthy successor to the game that taught me the meaning of “tough, but fair.”
Delete Image
Align Left
Align Center
Align Right
Align Left
Align Center
Delete Heading