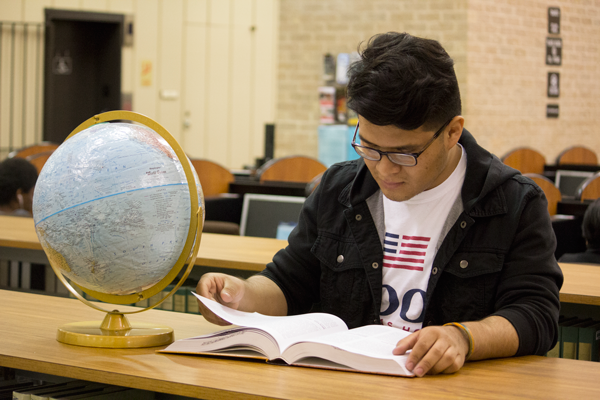 For computer science and sociology major Aaron Sustaita, DACA status means building a future.
“DACA, to me, means being able to access opportunities that I could have not originally had,” Sustaita said. “It means that not only do I have the opportunity to do something great, but to do a change in my life.”
Sustaita was born in Guanajuato, Mexico. His father and older brother went to Texas first.
When Sustaita was 9, he, his mother, two sisters and younger brother followed.
Sustaita does not like talking about his family’s border crossing experience. “It’s not because I am ashamed, but simply because I do not like disclosing that information,” he said. “All I say is that my family and I got here safe and we are happy to be where we are.”
His family reunited with his father in Balch Springs, where Sustaita enrolled in middle school and started ESOL classes. He later graduated from Seagoville High School.
At Eastfield, Sustaita participates in the Student Government Association, Phi Theta Kappa, Rotaract Club, Economics Club, Math Club, Communication Club and Science Club and is a campus ambassador. He is interning with Justice of the Peace Bill Metzger.
Sustaita plans to study at Richland College and the University of Texas at Dallas to pursue a career in government and politics.
He is closely following the presidential election, including the rise of Republican Donald Trump.
“I am not afraid of what he is going to do, but I’m afraid of what people are going to do,” Sustaita said.
He tries not to worry about the DACA program’s possible elimination.
“If it happens, it happens,” he said.
Both Sustaita and one of his sisters are DACA recipients.
“It has provided for me the benefits of being able to work, getting my state ID and getting my license,” he said. “It has helped me navigate through the power of building my credit, and it has helped me travel. Also, it has helped me financially, by getting [state] financial aid to pay for my classes at Eastfield College.”