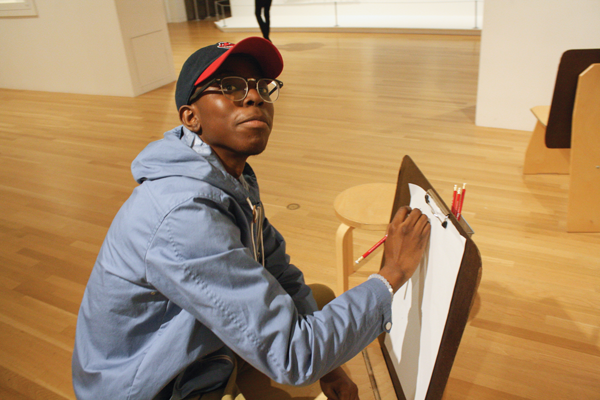 By Brianna Harmon
Information technology major John Kirvin, known for his infectious smile and “goofball” personality, died of a brain bleed April 7. He was 24.
Kirvin had been a member of the Communication Club since spring 2013. The club held a memorial for Kirvin April 11.
Fellow member Sonya Battle called Kirvin a giver in life and after death. His status as an organ donor helped eight people.
“I can’t imagine how much better a legacy anyone can leave,” speech professor Mary Forrest said. “He did everything for everybody. He really gave that much of himself to the club. He gave in life to the entire club, and he gave in death. … And I think, in a sense, he was giving back to us today again because he gave us now the opportunity that he has done and that is to be a donor as well.”
Kirvin was also involved in the Student Government Association. Kirvin’s best friend, Communication Club President Aley Salcedo, said that he was always welcoming people into her club.
“He was our entertainer, to say the least,” Salcedo said. “I kid you not, he had no idea about membership cost, he didn’t know about what events we were doing, but he knew that he wanted you to be at the next meeting.”
Kirvin recruited Jedidiah Starr, and they later became close friends.
Starr said Kirvin once gave him a ride to the Dining Etiquette Banquet. On the way, he stopped for gas. He pulled up to the pump and got out, leaving the car running. Starr said he was “freaking out.”
“I was like, ‘Bro, this car could have blown up or something,’ ” he said. “So I told him to please turn off the car next time you pump gas. That is one of the wildest and funniest memories I have with him.”
Salcedo said that no matter what, Kirvin always had a radiant smile on his face.
“Most of the time, we hung out was to do community service events,” Salcedo said. “I don’t think he knew how to frown. He will see you and give you the most genuine smile. It’s different because you are never around someone that was just as happy as he was. He really just wanted to make the world smile.”
Although Kirvin had sickle cell disease, he had high hopes for his future, Salcedo said. Doctors don’t know if it contributed to his death. He wanted to go to the University of North Texas and was considering a mission trip to Nepal.
“He was a really good computer guy,” Salcedo said. “What he was going to do in Nepal is teach kids about computers skills, how to work a computer. It was pretty much him wanting to go teach kids because he was really good at it. It came with ease to him.”
Salcedo said her memories of Kirvin are filled with humor, such as a SGA retreat at a lake. Kirvin and a friend, Ever Rodriguez, flipped their canoe, and Kirvin’s new glasses fell into the water. Kirvin and Rodriguez shared the latter’s glasses as they tried to row back to shore.
“John was a goofball,” Salcedo said. “He was notorious for tripping, falling, throwing things accidently.”
Kirvin’s mother, Rachael Mack, called him her biggest inspiration.
“He left a legacy,” she said. “He was giving and kindhearted. He never met a stranger, and you feel so comfortable around him. There is a difference between an impact and an impression, and John did not make an impression in my life. He made an impact. An impact tends to hit harder. He was genuine.”
Kirvin was born Nov. 5, 1991, and graduated from West Mesquite High School in 2010. He is survived by his mother; stepfather, Otis Mack; sister, Gabrielle Kirvin, and grandmothers, Carolyn Graves and Jennifer Thomas.
A memorial will be held at noon April 15 at City Temple Seventh-day Adventist Church in Dallas. He will be cremated.