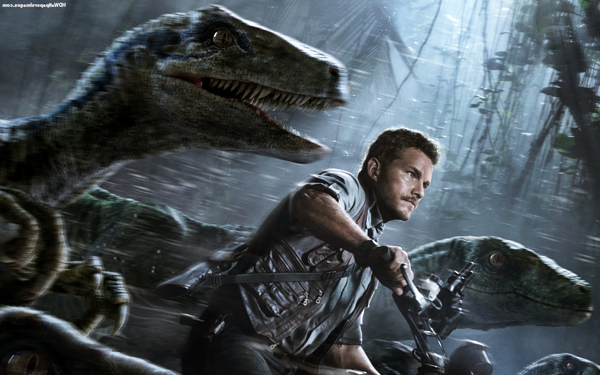 The depiction of a Velociraptor made famous by "Jurassic Park" is actually a Deinonychus, according to paleontology. COURTESY UNIVERSAL PICTURES


“Jurassic Park” blew up in 1993 by presenting audiences with a thrilling story about a theme park based around dinosaurs created from a single strand of DNA.

It was the first PG-13 movie that geology professor Daniel Murphy saw when he turned 13.

Now that he’s a scientist, he tries not to let his knowledge ruin a good film.

“I don’t let science get in the way too much when I enjoy movies,” he said. “The only time it gets in the way is when a movie tries to explain it in a scientific way to make it seem like they are doing something real, then they butcher it.”

While earning his master’s degree, Murphy studied micropaleontology and began to look at dinosaurs closer. In a Science, Technology, Engineering and Math STEMinar on March 4, he took an in-depth look at how much the dinosaurs in the movie resemble the real thing.

“The dinosaurs were not there just to be dinosaurs,” he said. “There is a deeper story about the hubris of man and the ethics of science.”

Although he enjoys the movie, Murphy believes that the extraction of DNA out of the amber is not possible.

He said that there is little to no chance that the DNA could ever be harvested out of the amber because it would have broken down by the point it reached modern time.

One of the biggest differences between reality and the movie involves one of the more iconic groups of dinosaurs, the velociraptors.

“Michael Crichton, when he wrote the original book, the velociraptors were actually the dinosaur deinonychus, which is what was actually depicted in the movie,” Murphy said. “He decided at the last minute that the name wasn’t scary enough, even though it literally translates to ‘terrible claw.’

Many dinosaurs, including Tyrannosaurus rex, had feathers and were precursors to modern birds. When compared, there is almost no difference between the two, said Ron Tykoski, director of paleontology lab at the Perot Museum.

“Birds and dinosaurs aren’t just similar, they’re one in the same,” he said. “There are a lot of anatomical features that you can point to in living birds that seem rather unique to us until you look at the fossil record of carnivorous dinosaurs.”

While most birds have evolved way beyond their fossilized counterparts, some birds still show their features.

The cassowary is a flightless bird that has three claws on its feet. While the two on the outside are typically harmless, the inside claw can be up to 5 inches long and can easily rip through human skin.

Murphy said some scientists are using the connection between birds and dinosaurs in an attempt to resurrect the prehistoric creatures.

Paleontologist Jack Horner is attempting to recreate a dinosaur by manipulating chicken genes.

By turning the dinosaur genes on in the chicken, scientists created an chicken embryo with the snout of an alligator.

Although this could set the stage for a “Jurassic Park” scenario, communications major Kyle Mabry believes that the world would not let something like that happen.

“I don’t think they would have a whole island,” Mabry said. “I think it would be more like the Dallas World Aquarium. I don’t see it being on the scale of ‘Jurassic Park.’