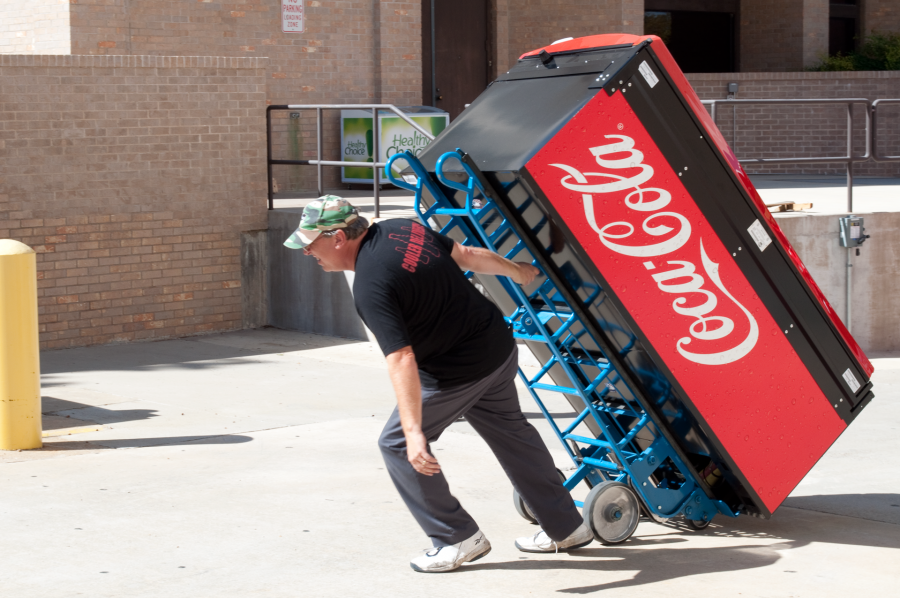 
By Claudia Guerra
The contract making Dr. Pepper the only beverage choice in the college’s vending machines expired on Oct. 31.
Now students can choose from multiple drink and snack brands, thanks to a new contract with Canteen Vending Services.
The district requested bids from different vendors in April. Canteen was awarded the new contract because it offered a variety of options.
Coca-Cola, Pepsi and Dr. Pepper brands fill the new soda machines, while the snack machines are larger and contain a variety of food options, including some with fewer calories and fat grams.
“We wanted a contractor that offered more of a variety of snack items,” Vice President of Business Services Adrian Douglas said. “We wanted more healthy food items [like granola bars and baked chips.]”
Students, staff and faculty had the opportunity to take part in selecting the new products. An email survey found that more healthy snacks and different types of sodas were being requested.
Douglas said the main objective was making sure students’ needs were met.
“We want to be able to offer selections that people want,” she said. “When we support [improving] the vending machines, we are, in essence, supporting Eastfield and our students.”
Proceeds from the vending machines help support student activities such as athletics and Student Life.
Douglas said next semester Canteen will increase the prices on some vending machine items by a quarter. However, she said there will be no other increases for the remainder of the contract, which runs five years.
One downside to the new machines is that some don’t have a debit or credit card slots. Those that do have been placed strategically throughout the campus.
“Most people don’t carry cash nowadays,” nursing major Yesenia Calvillo said “Everybody is using a debit card.”
Seventeen of the 35 Coca-Cola machines on campus also stock Monster energy drinks. Energy drinks claim to give a boost of energy due to a high caffeine content, but studies have shown that there are health concerns. The New York Times recently reported that five people have died in the past three years after consuming Monster drinks.
School nurse Cynthia Taylor expressed concern about the energy drinks students consume on campus.
“Our students aren’t label readers, and they need to be more conscious of what they’re putting into their bodies,” she said.
Douglas said the school is not trying to promote unhealthy snacks. It is just trying to offer a variety.
“We realize it may not be something that everyone may chose to partake in, but it may also be the choice of some,” Douglas said. “Our goal is to be sure we can provide items and selections that are going to be satisfactory to as many people on campus as possible.”
Delete Image
Align Left
Align Center
Align Right
Align Left
Align Center
Delete Heading