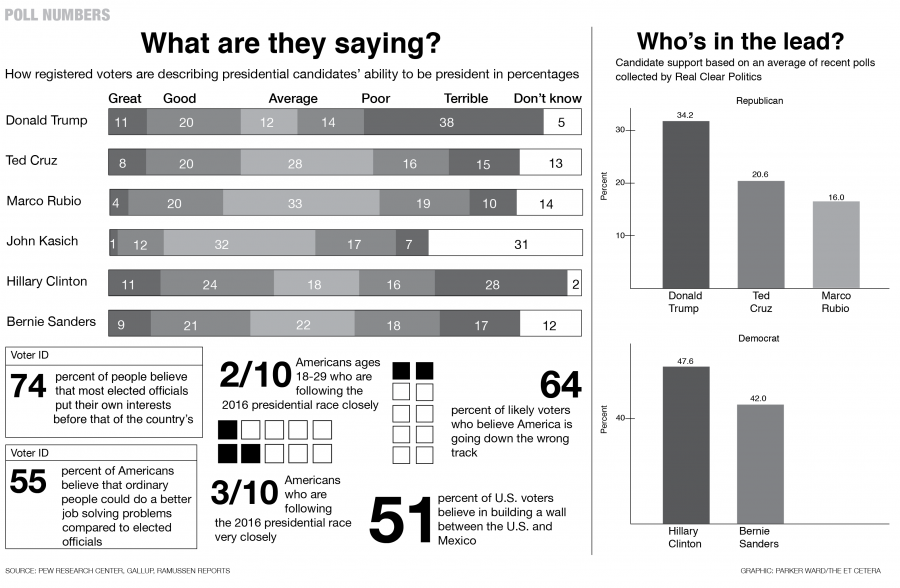 By Parker Ward
During election season, news outlets are reporting on different polls every day.
Every year, thousands of polls are conducted to gauge public opinion about candidates and policies through a randomly selected group of people.
Popular media has taken such a liking to polling that in 2012, the Five Thirty Eight blog made headlines during the presidential election by correctly predicting how every state’s electoral college would vote for president.
Not every poll is perfect, however. Statisticians leave some margin for error due to things like social desirability bias, where some say what they believe to be politically correct for fear of backlash.
Now, polling has become an integral part of the political system.

It determines how people feel about the particular set of candidates running in an election, and in some cases can determine if a presidential candidate is allowed to participate in televised debates.
In the first Science, Technology, Engineering, and Math STEMinar of the year, titled “Statistical Analysis in Political Polling,” political science professor Harold Clarke from the University of Texas at Dallas spoke about the history behind polling and how people are doing it today.
Although Clarke has been polling with various organizations since the 1970s, he currently works with international internet-based market research firm YouGov, creating public opinion surveys.He also does research with the Bill Gates Foundation to see how the foundation can help with foreign aid.
According to Clarke, polling has become easier over the years due to the increasing number of tools available to him.
“For the kind of work I do, what helps is the Internet,” he said. “Not only for gathering the data, but also communicating with other scholars so you can move so incredibly quickly.”
“Polling used to be quite slow. ey would either do it face-to-face in someone’s home, or they would do it out on the street corners. at took a long time. Today with the rise of the Internet, you can do a national poll in an afternoon.”
Clarke said the first place to look to test the accuracy of the poll would be the website of the polling organization or “polling house.” From there, you can study the methodology used in the poll.
The polling industry covers everything from the popularity of Beyoncé to public opinion of long hair on men. However, Clarke warned that some political polls are made to mislead voters.
“Sometimes polls are done deliberately by candidates or parties to make themselves look good or make their opponents look bad,” he said. “I tend to discount any polls done by a political party or candidate because they may be biased.”
Clarke believes that Gallup produces some of the best polling content.
Some students enjoyed the nuance of infor- mation gained from the STEMinar.
“The information was really helpful and useful, stuff I really never knew,” computer science major Michael Davis said.
Statistics professor Erika Glaser said the STEMinar took a subject that the vast majority of people dislike — math — and showed how it can be interesting.
“You can do statistics in science, you can do statistics in social sciences,” she said. “It’s just endless. What I really like is that even though it’s math, it’s applicable to any field.”
Delete Image
Align Left
Align Center
Align Right
Align Left
Align Center
Delete Heading