Theatre Co. takes you down the rabbit hole 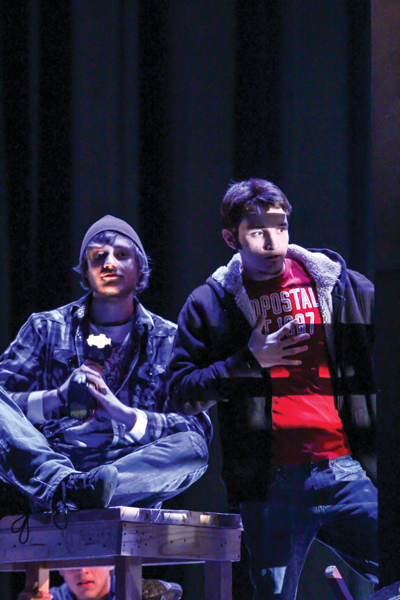 The Eastfield Theatre Co. is going “entirely bonkers” to prepare for its performance of “Alice In Wonderland” at the Texas Community College Speech and Theatre Association One-Act Play Festival at Tarleton State University.

“It’s not a traditional representation of ‘Alice in Wonderland,’ ” director Dusty Reasons-Thomas said. “It’s actually presented as a group of kids at an orphanage in an attic. They have many random items, and they are reenacting ‘Alice in Wonderland.’ ”

Lewis Carroll’s 1865 novel “Alice’s Adventures in Wonderland” has spawned many retellings. The story of a girl following a rabbit down his hole and her encounters with the peculiar characters inhabiting Wonderland has remained popular with adults and children.

Reasons-Thomas said she wanted to choose a show that had not previously been staged at the competition.

“The script is very unique,” she said. “It … has very detailed stage directions. The hardest part was taking the script and putting our own spin on it.”

The tech department also faced challenges with the set.

“The play takes place in an attic, and it’s a little hard to demonstrate that,” stage manager Iris Hernandez said. “You need to have an imagination to see how the audience is looking into an attic on the stage.”

The cast and crew had limited time to prepare.

“We still need the rehearsal time, and getting to perform before we go will help,” Reasons-Thomas said. “Last year, we got snowed out on show nights, so weren’t able to perform, and that makes a big difference. This time, I think they will do really well getting the chance to perform it four times before going to competition.”

Reasons-Thomas said the group has grown close through the intense preparations.

“We have veteran actors who have gone with us to the festival before, and we also have many new students who have never gone,” she said. “Last year, everyone in the play had been to the festival, so it’s exciting to know more than half this year will be going for the first time. And half of them haven’t even performed a play with us before, so it’s a very interesting dynamic. The veterans are taking a good leadership role.”

Catherine Elaine Christenson, who plays Alice, said she struggled to understand the character at first, but as rehearsals continued, she began to relate to her.

“Dusty told me the other day that I was the tomboy version of Alice,” she said. “I’m not afraid to get down and dirty. I’m curious and full of awe and wonder. I would say we have a lot in common.”

Hernandez said the hardest part of managing the show was keeping open communication with the cast, director and tech department.

“You just have to make sure everyone knows what’s going on,” she said.

Christenson expects the hard work to pay off.

“I can’t wait to see what we’re capable of once everyone knows their lines,” she said.