MOVIE REVIEW: The dinos are back, but they've changed their tone 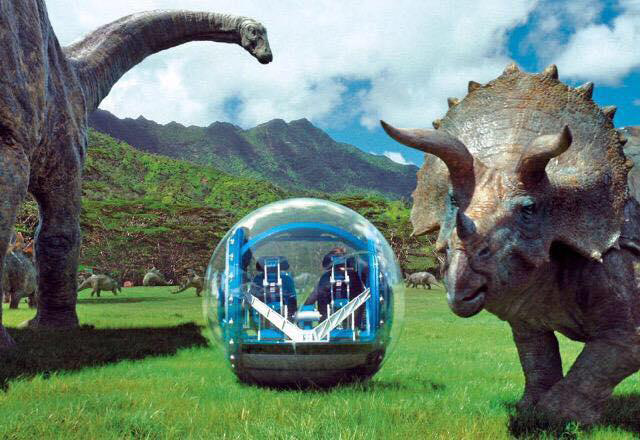 By James Hartley
“Jurassic World” is the first true blockbuster of the year, but audiences who grew up with the original three films will find themselves sorely disappointed.
The movie, though it pays homage to the original “Jurassic Park” throughout, holds very few of its original elements. The psychological thriller side of the original trilogy is tragically lost, replaced by cheesy one-liners and daylight chases. Though suspense does remain, the tone of the film is very different.
Despite these flaws that will disappoint older audiences, the film is still enjoyable. It stays true to the initially good day where everything goes awry. What makes the “Jurassic Park” films different from other disaster movies is the dinosaurs. This time, when a dinosaur – cooked up from a variety of creatures in a lab – escapes, not even the most valiant of efforts can save the park.
Brothers Gray (Ty Simpkins) and Zach (Nick Robinson) are lost in the park and their aunt Claire (Bryce Dallas Howard) and ex-Navy-sailor, now-velociraptor-trainer Owen (Chris Pratt) are on a mission to find them. In that way, the new film is similar to the original. Still, the comedy that comes with Pratt being in a lead roll is a major change in the tone. It should also be noted that the trained velociraptors being a major protagonist is a slight drawback for the film.
It’s not all bad, though, as the movie does entertain. Character development, though limited, is experienced. The film is also a fun and at times suspenseful adventure that new audiences will love.
Fans of the originals will be excited to see Dr. Henry Wu (BD Wong), who was the head scientist in the first film and the only returning actor, as well as monumental sights such as the “Research” sign and welcome center from the first film. The night-vision goggles, old jeeps and a giant dinosaur chasing a person down a road will induce nostalgia.
Overall, “Jurassic World” is set up to create the same type of attachment and following of fans in younger generations as it did for those who grew up with the original films. Though many will be disappointed if they go into the theater expecting the classic tone and execution, an open mind will allow for enjoyment of a new breed of dinosaur thriller.
Delete Image
Align Left
Align Center
Align Right
Align Left
Align Center
Delete Heading