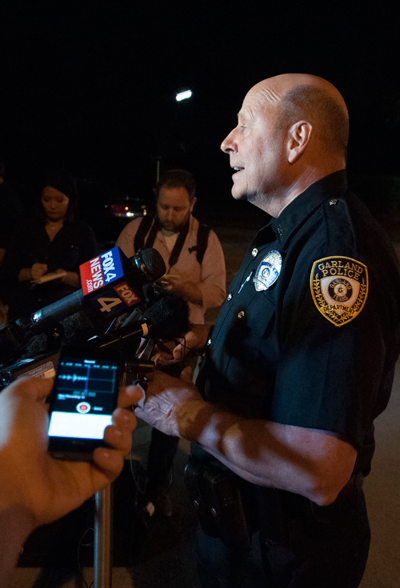 By James Hartley
Two men were killed after opening fire outside a controversial art exhibit in Garland May 3.
The Curtis Culwell Center was hosting a contest and exhibit featuring artwork of the Islamic prophet Muhammad when the shooting took place.
Security officer and former Rowlett police officer Bruce Joiner, 58, was shot once in the leg with an assault rifle before Garland police returned fire, killing the assailants. Joiner was released from the hospital the same night.
“The effectiveness of the public safety response illustrates why Garland is one of the safest cities in America, and yesterday’s events don’t change that,” a Garland police press release said.
The event was hosted by the American Freedom Defense Initiative and political activist Pamela Gellar.
The website of AFDI, where the event was promoted, said the contest and exhibit were held “to show that we will defend free speech and not give in to violent intimidation.”
Off-duty Garland police officers had been hired by Garland ISD to work the event, but official GISD peace officers were unarmed. Garland police said that due to the controversial nature of the event, they were prepared for such a response.
“Security was set up heavier for this event, simply because of what they represented and what has happened in the past, … things that have happened around the world,” Garland Police Department spokesman Joe Harn said.
Other depictions of Muhammad have been met with violence. Terrorists invaded the Paris office of the satirical magazine Charlie Hebdo on Jan. 7, killing 12 and injuring 11. The magazine previously ran a number of controversial cartoons featuring the Islamic prophet.
The FBI and Bureau of Alcohol, Tobacco and Firearms are investigating the Garland incident. Police said that a motive was unknown on the night of the shooting, but a May 4 report from CNN suggests that one of the two men has possible ties to terrorist groups overseas.
One suspect, identified by federal law enforcement as Elton Simpson, linked himself to the Islamic State group via Twitter before the attack. Simpson was convicted for making a false statement revolving around terrorism in 2011.
The assailants’ bodies remained on the ground while authorities checked their vehicle for bombs.
Attendees were evacuated from the area after a lockdown.
They were bussed to an undisclosed location to be debriefed by law enforcement officials as potential witnesses.
In response to the shooting, GISD schools have increased security measures on campus.
Businesses and roads that were closed and evacuated in the shooting’s aftermath were re-opened May 4. Portions of Naaman Forest Boulevard and
Elliot Avenue and the entire property of the Culwell Center remained closed.