Women speak through ‘Her Body, Her Words’ 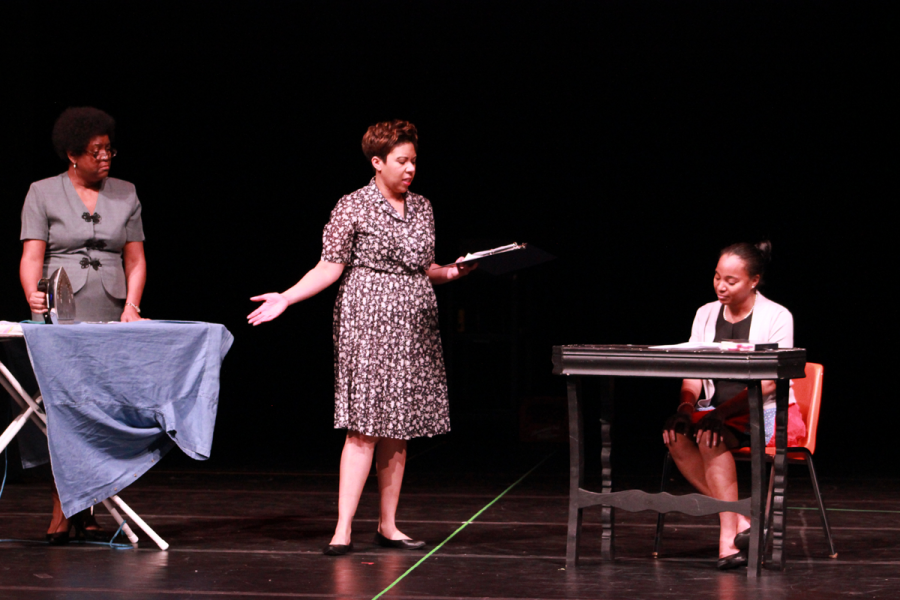 From left, Selena Stewart-Alexander, Courtney Carter Harbour and Larissa Pierce perform a scene from “A Raisin in the Sun” by Lorraine Hansbury.


By Danyelle Roquemore
Women have traditionally been overshadowed in the arts, whether it’s the way female characters are portrayed or the lack of famous female playwrights and authors.
In honor of Women’s History Month, faculty and staff from the Arts, Language and Literature division performed “Her Body, Her Words,” which included pieces written and performed by women.
The show, which took place on March 12, included two readings, a monologue, a video, a scene from a play and a live song and dance.
Courtney Carter Harbour, associate dean of Arts, Language and Literature and co-chair of the Women’s History Month Committee credited theater professor Dusty Reasons for her perspective on how to visually and technically execute the performance.
Reasons planned the order of the pieces, the placement of the performers and the lighting.
“I think the program flowed beautifully and a lot of that had to do with Dusty’s insight in terms of where to place each performance or reading,” Carter Harbour said. “She was really smart about the program and how she put it together.”
Though the performance was not planned around a specific theme, English professor Elizabeth Huston noticed an underlying theme in most of the of the show’s pieces.
“She made the connection that [most] of our pieces were dealing with men to some degree,” Carter Harbour said. “[Most of the pieces] spoke about men and the relationships that women have with men. Even the [excerpt from] ‘Maxims of Marriage’ may be an extension of that and examines the male and female relationships and the roles that women play.”
The performance began with a scene from Lorraine Hansberry’s “A Raisin in the Sun,” featuring English professors Larissa Pierce and Selena Stewart-Alexander along with Carter Harbour. The scene demonstrated the complexities of the three women and their relationships with each other and the men in their lives.
The performance was followed by a video entitled “Cadillac,” the only part of the event that wasn’t live. The video was shot and edited by Danielle Georgiou, head of the dance department.
Georgiou said the video is unique because of the perspective of the camera.
“I’m holding the camera in my stomach, and I’m dancing with her,” Georgiou said. “[The audience] is getting a really personal view because the camera is dancing with the dancer.”
It features dancer, Lauren Douglas, in a parking garage near a few Cadillacs.
English professors Betsy Joseph and Huston both performed readings for the event. Joseph read Sharon Olds’ “Cambridge Elegy,” while Huston read excerpts from Jane Austen’s “Pride and Prejudice” and Helen Fielding’s “Bridget Jones’ Diary.”
Carter Harbour’s favorite part of the program was the song and dance combo with Reasons performing a cover of Adele’s “Someone Like You” with Georgiou as the dancer.
“It was very powerful and heartfelt to have one singer and one dancer that were synchronized in their interpretation of the song,” Carter Harbour said. “It was really beautiful to watch and listen to. [It was] very powerful.”
The finale was a monologue by Linda Bloodworth-Thomason entitled “They Shoot Fat Women, Don’t They?” Technical theatre producer Lori Honeycutt performed the monologue, which addressed self-image and what others think of women based on how they look physically.
Pierce, who also co-chairs the committee, said she is hoping to see the event grow in the future.
“I would definitely like more student participation,” she said.
Delete Image
Align Left
Align Center
Align Right
Align Left
Align Center
Delete Heading