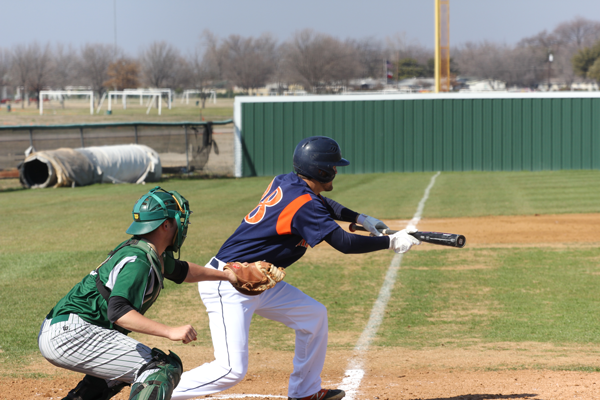 By Brianna Harmon and Juanita Hernandez
Despite multiple game postponements and cancellations due to the recent snow and rain, the Eastfield Harvesters baseball team continues to climb the national rankings.
Eastfield, which was 13-4 overall and 4-2 in the Metro Athletic Conference heading into this week, is ranked third in the latest National Junior College Athletic Association’s Division III poll.
Brookhaven 4, Eastfield 1
The Harvesters outhit Brookhaven 10-5, but the Bears made the most of their opportunities and Eastfield’s three errors to win the opening game of the three-game conference series on March 6 at Brookhaven.
Sebastian Murray (2-2) gave up just five hits and one walk while striking out four over six innings, but took the loss for the Harvesters.
Casey Maack led Eastfield at the plate, going 2-for-4 and driving in Cole Hill for the lone-run. Hill and Cody Duplechin were also 2-for-4.
Eastfield 10, Brookhaven 0
Pitcher Blake Barr (4-1) tossed seven shutout innings, allowing just three hits while striking out eight and walking only one, to lead the Harvesters to a big win in the opening game of the March 7 doubleheader in Farmers Branch.
Eastfield scored six runs in the first three innings to take control early and never looked back. Duplechin led the way offensively, going 3-for-3 with two doubles, an RBI and a run scored, and Tanner Dickerson was 2-for-3 with a double, two RBIs and two runs.
Also contributing for the Harvesters were Daniel McConn, who was 2-for-2 and two RBIs and Michael Kister, who was 2-for-4 with a double and two RBIs.
Eastfield 10, Brookhaven 2
Brookhaven kept the game close through the first four innings, but the Harvesters plated six runs in the final four innings to win the second game of the March 7 doubleheader.
Brandon Saddler (1-0) came on in relief of starters Robert Russell and Evan Rogers to capture the win, giving up six hits and two walks while striking out three in four innings of work.
Cody Duplechin went 3-for-4 with two RBIs and two runs scored to lead the way for the Harvesters. Other top producers were Daniel McConn, who was 2-for-3 with a double and three runs scored; Michael Kister, 2-for-5 with a stolen base, three runs scored and an RBI; Jason Serchay, 2-for-5 with two runs scored; and Mason Arasato, 1-for-5 with two RBIs.
Eastfield 12, Northland 6
Jason Serchay went 3-for-3 with a double, three RBIs and one run scored as the Harvesters doubled up Northland College of Wisconsin in the first game of a March 10 home doubleheader.
Other offensive leaders for Eastfield were Blayten Magana, who went 2-for-3 with a triple, a double, two RBIs and two runs scored, and Ryan Langley, who was 2-for-3 with two stolen bases, an RBI and a run scored.
Jacoby Tipton (1-0) earned the win in relief of starter John Bodine. Tipton pitched three innings, giving up four runs on four hits and three walks while striking out three.
Northland 8, Eastfield 5
The Harvesters dropped Game 2 of the doubleheader when Northland rallied for three runs in the top of the ninth inning off reliever Garrett Stringer (0-1). Stringer gave up four hits, two walks and three runs in his two innings on the mound.
Connor Scruggs went 3-for-4 with a double and three runs scored, and Casey Maack was 3-for-5 with a home run and an RBI to pace the Eastfield attack.
Delete Image
Align Left
Align Center
Align Right
Align Left
Align Center
Delete Heading