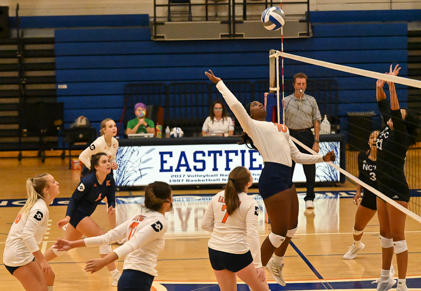 Naomi Polnett attacks for Eastfield during the game against North Central Texas College on Aug. 31.

The Eastfield women’s volleyball team has started its season without a full-time head coach. The Harvester Bees lost their previous coach, Brandon Crisp, over the summer when he took a head coaching position with the Lamar University volleyball program.

During his eight years at Eastfield, Crisp led the team to five top-20 national rankings, as well as the 2017 NJCAA national championship.

Despite starting the season with two losses and the coaching transition, the team remains optimistic.

“We’re confident going into this season because we’re confident in each other,” freshman defensive specialist Mackenzie Murphy said. “We have a really strong team either way.”

Unsure of when their new coach will be announced or when they will be able to start working with them, the players have been left in the dark about the hiring process.

“I feel like it’s not really an obstacle for us,” freshman middle blocker Naomi Polnett said. “We’re a good team and we really love each other.”

The players say they have no plans to allow these unknowns to distract them from the relationships they’ve built with each other already.

“We’ve worked with two coaches so far,” Polnett said. “But everyone gets the tea when we get the tea about the new one.”

Giovanni Cardenas, former coach with Incredible Crush volleyball club, was hired in late July to fill in while Dallas College worked to secure someone for the permanent position.

“So far, we’re doing really good,” Cardenas said. “We’ve had two games for now, with two [Division I] teams. Even though we lost them both, they are still performing really good.”

With conference play approaching, Cardenas expects the Harvester Bees to be the team to beat regardless of who is coaching them.

“I’m excited,” Polnett said. “I feel like we have a really good court connection, and I feel like we’re really going to dominate the conference this year.”