‘My body, my choice’: Abortion-rights protests continue in Dallas 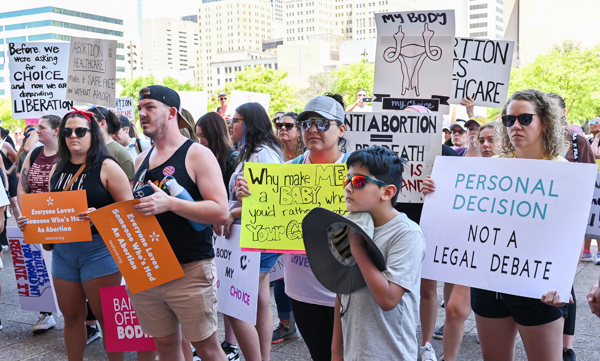 Abortion-rights protesters listen to various speakers at the Dallas Rally for Abortion Justice.

HK Gray’s world unraveled when she found out she was going to be a mom at 16.

Gray’s OB-GYN recommended birth control prior to her pregnancy, but the state of Texas requires minors to receive parental consent for contraceptives. Her mother was in prison, and her dad was homeless.

“I was forced to go without birth control that could’ve worked best for me,” Gray said.

Living on her own without assistance from other family members, Gray had no choice but to raise a child. The following year, she found herself staring into a positive pregnancy test again, wondering how she could support a second child.

Gray decided terminating her pregnancy was best for her family. With her parents out of the picture, she needed to pursue a judicial bypass, a process where she needed to prove her “maturity” to a judge – which includes presenting academic achievements and legal information.

“It was exhausting and made me feel small,” Gray said. “But I was lucky to have my abortion.”

On June 29, the fourth day of Roe v. Wade protests in Dallas, Gray, a North Texas native, shared her story with hundreds of protesters at an abortion-rights rally at Dallas City Hall.

The landmark ruling of Roe v. Wade in 1972 guaranteed Gray’s right to an abortion on a federal level. On June 24, the Supreme Court voted 5-4 to overturn the ruling, allowing states to criminalize abortion.

“I can’t help but to be scared or angry for anybody else who’s going to need the same services I needed,” Gray said.

Gray’s story has traveled across Texas – all the way into the state’s government chambers. In 2019, she testified before Texan politicians regarding the state’s abortion laws.

She works as an abortion advocate with the Texas Equal Access Fund, a Dallas-based abortion fund that assists expecting mothers with health care and abortion access.

“The Supreme Court has destroyed the last shreds of our national right to abortion,” TEA Fund Executive Director Kamyon Conner said at the rally.

Numerous protesters carried signs claiming the reversal of Roe v. Wade signaled a regression in political progress, but Conner spoke about protesting for abortion access at the state level.

“We’re ready to fight for our rights to have access to comprehensive reproductive healthcare, which includes abortion,” Conner said.

Thirteen states, including Texas, passed “trigger laws” to limit abortion in anticipation of Roe v. Wade’s reversal. While some of these states banned abortion within hours of the reversal, Texas will ban abortion 30 days after the court’s judgment.

Although Gray obtained her abortion when it was legal, she said mountains of financial and legal work made the process difficult for her.

The TEA Fund assisted Gray with obtaining an abortion by taking on legal documentation and financial costs.

“I’m angry because, in the last four years, I’ve spoken at many rallies … and in front of politicians who promised Roe would never be overturned,” Gray said.

Before Gray spoke about her experience, the protesters chanted for abortion-rights.

“My body, my choice!” the protesters’ unified cry echoed throughout downtown Dallas.

A similar instance unfolded for the other abortion advocates who spoke before Gray. The crowd’s energy remained constant as time went on, an unyielding goal to right to abortion access.

When Gray wrapped up her story, the protesters erupted into applause.

“Roe may be gone but abortions will always happen,” Gray said. “Now, more than ever, we need to support abortion.”

‘Choice is in danger’

Women are often at the forefront of abortion-rights protests, but millions of American men have joined their cause, equally angered by the Supreme Court.

Cody McMillen, a Mesquite native, showed up to the protest covered head-to-toe in chainmail armor, brandishing an iron sword and sturdy shield.

“I’m here to protect those who can’t protect themselves,” McMillen said proudly.

Despite being in 90-degree heat, McMillen marched for the women enraged by the overturning of Roe v. Wade.

“It’s my duty to be here and fight for them,” McMillen said. “Hopefully, but not literally. But I’m prepared if it comes to that.”

McMillen started protesting after the murder of George Floyd in 2020.

Since then, McMillen shows up to protests when he can – always wearing his trusty armor.

“When I started protesting, I realized I’m not one for shouting,” McMillen said. “That’s what these people are here for. My skills serve me best protecting these people and stopping those who cause them harm.”

Nick Kinkade, a Dallas native, isn’t vocal either, but that didn’t stop him from protesting for the first time.

“I’m just trying to support in any way I can by being present,” Kinkade said.

Kinkade said he was shocked when the Supreme Court rescinded the landmark decision.

“I don’t have a particular opinion on it as a male specifically,” Kinkade said. “I think, as a human being, we should look out for other human beings.”

He raised concerns about the potential legal implications of the reversal, especially for other rulings for bodily autonomy.

“America is about freedom of choice,” McMillen said. “Currently, that choice is in danger of being taken away from us.”

Anti-abortion protesters showed up about noon and waved signs denouncing abortion. One of them raised a banner demanding certain groups of people to “repent,” one of them being “abortionists.”

The abortion-rights rally erupted into boos.

Energized by anger, a rallying cry for abortion-rights drowned out the dissenting voices. Numerous supporters splintered from the rally to surround the anti-abortion protesters within minutes.

Around 12:14 p.m., Dallas police intervened and separated the two groups. By 12:30 p.m., a metal barrier prevented the groups from clashing further, but several more supporters rallied behind the barricades.

Abortion-rights supporters pushed against the barricades, causing the anti-abortion protesters to back away.

Police tried to keep the abortion-rights demonstrators at bay, but they couldn’t hold the line with few officers.

Protesters marched into South Akard St., sprawled out into the AT&T Discovery District, then broke into three separate marches across downtown Dallas.

Among these abortion-rights protesters was Cody Johnson, a Dallas native. When anti-abortion protesters showed up, he didn’t hesitate march into one’s face.

“What the hell is your problem?” he shouted.

As a Christian father of two kids, Johnson said he felt a religious duty to demonstrate his support for abortion. He attended the protest wearing a shirt that read “Binge Jesus.”

“The Bible says to love everybody and they’re spreading hate,” Johnson said.

Religion has become more involved in American politics. Since May, the Supreme Court ruled in favor of religious institutions three times.

“SCOTUS just overruled Roe & Casey, ending one of the most morally & legally corrupt eras in US history,” Texas Attorney General Ken Paxton tweeted shortly after the court cast its decision. “Praise the Lord.”

Johnson denounces those who use religion, especially Christianity, to reinforce political talking points.

Upon learning that Roe v. Wade was overturned, Johnson said he felt heartbroken. He grew up interpreting the ruling as a human right.

Johnson is concerned about the future of his children in a post-Roe America, especially his daughter.

“Jesus is pro-choice, and God gave everyone the right to choose,” Johnson said.

Anger bolstered Johnson’s chants throughout the rally. He’s determined to use his shouts to represent his discontentment with religion in American politics.

“My daughter will be 8 years old in August – that’s what I’m here for, and every other woman here,” Johnson said. “I’m tired of these people falsely preaching The Bible.”