The Et Cetera • May 9, 2022 • https://eastfieldnews.com/25185/opinions/opinion-redlining-still-hurts-minority-communities/ 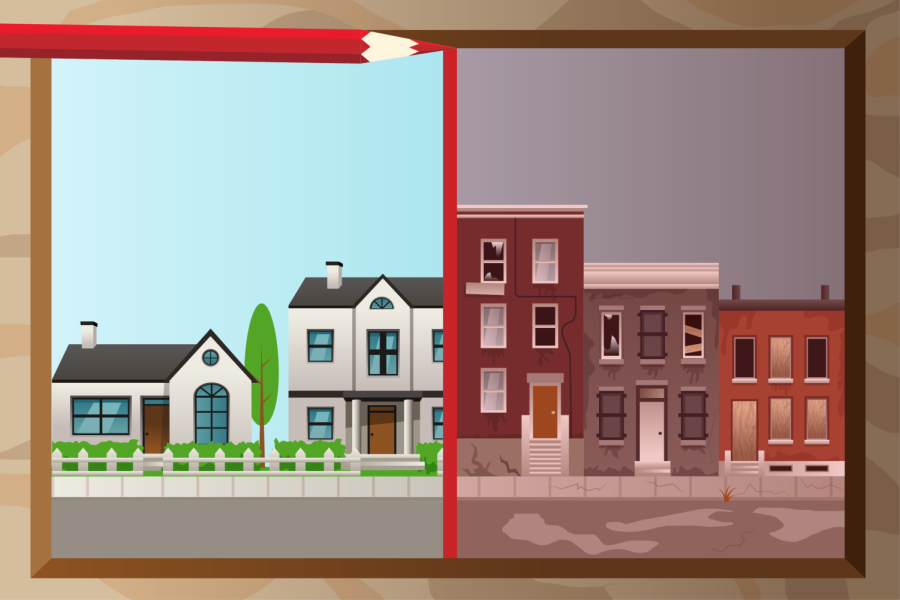 Growing up in a South Oak Cliff, a previously redlined neighborhood, allowed me to see the disparity of funding in certain areas. My area predominately serves a working-class population and lacks the lavish restructuring of the newer suburban areas.

For the most part, there are no sidewalks in my area, but if you were to go to a newly gentrified area, you can see the start of sidewalk construction. There is also a freeway running through the middle of the neighborhood and a truck stop beside it, making the area a stopping place for trailers which damage the roads.

In the 1930s, a form of active segregation called redlining was implemented within major cities by the federal government. The term redlining originated from actual red lines being marked on neighborhood maps to identify predominately Black neighborhoods. Many banks considered the residents of these neighborhoods low income and unreliable and would deny them lending or investments services.

Every city has a neighborhood they’ve redlined in order to protect the wealthy and white while also denying resources to Black communities.

Researchers from the National Community Reinvestment Coalition, the University of Richmond and University of Wisconsin-Milwaukee analyzed historic redlining maps from about 142 urban areas in the U.S. In these studies researchers found higher rates of poverty, shorter lifespans and higher rates of long-term illnesses in the formerly redlined areas.

For this project they collected health and socioeconomic data from specific Richmond, Virginia, neighborhoods. While life expectancy in the wealthy West End is 89.3 years, residents of lower income neighborhoods, especially in the 23223 ZIP code, have a life expectancy of 68.1. There is also a 98.9% poverty rate there compared to 3.6% the West End.

A clear example of systematic racism is right in front of us. We’re seeing the slow dissolvement of Black communities that are pushed out as richer white neighborhoods gentrify these areas to make them better. Construction in “improved” areas eventually runs out many families who have spent their whole lives in those neighborhoods.

This exact thing happened in Uptown and Victory, a Dallas area once known as Little Mexico. Back in the 1960s, when Jim Crow laws segregated many Latinos out of Dallas, Little Mexico was a haven for them. But as Harry Hines Boulevard and the Tollways brought an economic boom to the area, the Mexican culture and population were pushed out.

We should all educate ourselves about the needs that still exist for redlined neighborhoods. These needs include sidewalks, access to public transportation, improved funding for education and housing with better foundations.

In 2020 JPMorgan pledged to invest $30 billion into minority neighborhoods to close the wealth gap in America. Though this is a start, we need to start holding big corporations accountable for their influence in the redlining map. Redlining can be traced back to big banks inflicting their prejudice in order to give people with economic influences a leg up.