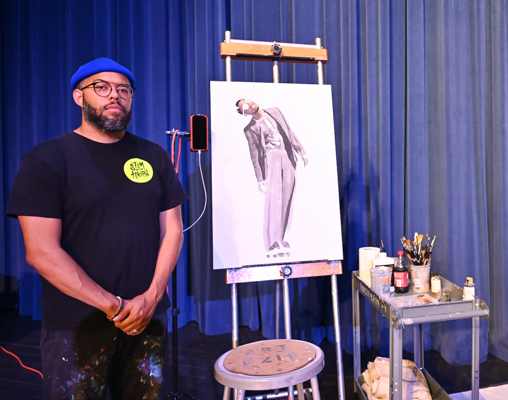 Cleo Sol’s smooth and soulful voice fills the Eastfield performance hall. On the stage sits an inspired artist, a wooden easel and a stark white canvas. With his face just inches away, he confidently places paint to paper, leaning back periodically to bob his head and shimmy his shoulders in rhythm to the music.

A constant on-beat tap of his foot proves that the music is part of his flow and helps to take the lead in his dance with the brush. Funk, vibrance and attitude surge from the auditorium speakers, the bristles of the paint brush and Jeremy Biggers’ soul. He says flamboyancy will be the painting’s essence, but subversion is the overarching goal.

Biggers explains that being bold and unapologetic while being Black could historically put you in harm’s way. But in this gallery space, it will be celebrated.

For an upcoming exhibit, he will use oversized portraits and vivid colors to make this point.

“Taking up space, being as big as possible, puts a target on us sometimes,” Biggers says. “Just being that is an act of defiance.”

After 10 years away, Biggers returns to Eastfield campus for a micro-residency to mentor current students. Upon receiving a National Endowment of the Arts grant, Biggers has had the opportunity to make appearances at many of the Dallas College campuses, including an exhibition at Brookhaven, a workshop at Cedar Valley and an artist talk at Mountain View. Biggers now joins Eastfield for two days to share his knowledge.

No longer attending classes himself, he still treasures the time he spent at this campus. Taking his lunch into one of the familiar art classrooms, Biggers takes a moment to look around and reminisce about all the time he spent here.

“I didn’t have a studio at home and didn’t have to be into work until 3 or 4 o’clock, so I would still be in the classroom working on projects,”
he said. “I owe a lot to these rooms.”

MICRO-RESIDENCY
Even with a powerful presence on stage, Biggers isn’t intimidating.

Prior to starting a slide presentation for his micro-residency at Eastfield, Biggers took the time to connect one-on-one with the occupants of the auditorium seats. Asking each person how they are feeling or what show they were currently watching broke down the imposing fourth wall between presenter and attendee.

“Jeremy is the kind of person that you would like to be a close friend,” Alison Starr, Dallas College gallery manager, said while introducing him to the crowd.

Inviting students on stage to watch him in action, he sat back down on his stool and returned to his colorful canvas. Stopping often to answer the questions of inquisitive minds, he refused to cut an answer short.

There were no secrets to his art. He allowed everyone to have access to his process.

“I love how he talked about how to make art affordable and accessible,” education major Hannah Kelley said.

When seeking advice on how to improve her painting skills without having to invest too much into the products, Biggers gave her obtainable
suggestions she could pick up at the local hardware store. He insists that art is for all people, not just those who can afford it.

A STUDENT TEACHING
Biggers liked to joke about how he spent seven years at Eastfield, but when he thought about it in depth, that exaggeration of time was not far off from reality.

As a long-term art student he made a special connection with one instructor. Taking every class Kathy Windrow offered, they built an unbreakable bond. Windrow’s name came up frequently in Biggers’ conversations about inspiration, and he influenced her just as much as she taught him.

“He kind of taught me how to teach,” Windrow said. “He taught me how to give students a lot of freedom to explore their own vision. And one way he did that was by always taking my ideas or my suggestions for a project and really running with them.”

Windrow recounts multiple times that Biggers filled every wall of her classrooms with his art. In only eight weeks’ time, he could cover many square feet with drawings, paintings and digital photography.

But it wasn’t only his work ethic that stood out. Even as a young student, Windrow said he had a knack for inspiring his peers and moving through life with patience and grace for others.

During a project that involved creating life-sized self-portraits, Biggers walked into class one day to find another student working on top of his canvas. When the mistake was pointed out to the student, Biggers sensed the embarrassment and didn’t miss a beat.

“Jeremy said ‘That’s OK, no problem. You keep drawing on that one. Should I draw on this one?’ And they just switched identities,” Windrow said. “That was such a Jeremy thing to do.”

Windrow said Biggers was always a natural leader. Comfortable in that role, he used compassion to show the people around him how to move through life.

“Other students have taught me things too, but I think Jeremey taught me more about humanity,” Windrow said.

STORYTELLING
Pulling much of his inspiration from the struggles Black Americans face while finding their place in the world, Biggers uses art in all forms to tell their stories. In respect to identity issues the Black community deals with, such as “code-switching,” he finds some solace in helping to communicate these problems with others. With some of his exhibitions, like “Influence,” he can portray these conflicting identities with the broader public.

Understanding the powerful impact of recent social justice issues such as the killing of George Floyd, he finds it necessary to represent the side of the story that he feels is often times diminished. Having an emotional response to the images of police brutality he has witnessed againsteople of color; he chooses to use his talents to convey these feelings to his audience.

“The most hurtful thing is the lack of acknowledgement that there’s two different existences for Black Americans and white Americans,” he said. “It’s disrespectful and a slap in the face to people that are seeing the same information and seeing the same video footage.”

Despite feeling like there might not ever be a way to force everyone to see eye to eye, his art will always remain a sentiment to his perspective for future generations. Acting as a time capsule, he attempts to use some of his work as documentation of current issues and conversations he thinks should be had.

“There’s no way one single painting that I create will solve the problem,” he said. “But at the very least, I’m compelled to make the work that I feel will make it digestible, at least in visual form, for certain people.”

The stories he tells with a paintbrush are meant to move his audience, but the likeness of the figures he portrays hold substantial meaning as well.

Surrounded only by white faces hung in museums for most of his adolescence, Biggers now holds representation in his art as a high priority.

“When you don’t see yourself in those spaces, it kind of makes you feel like there weren’t people in those times that look like you,” Biggers said. “I just want to make the art so that other people that are like me, that grew up in a similar community, or grew up in similar situations financially, can see that work and maybe start their art career earlier than I did.”